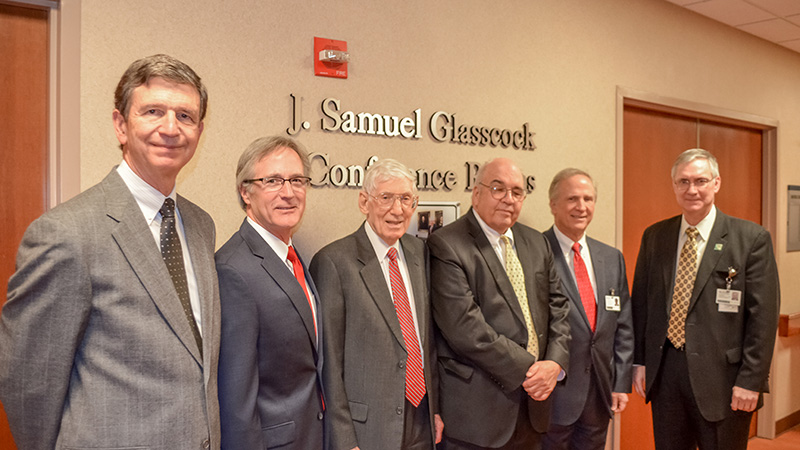 Whitney Saunders, left, has been named as vice chairman of the Sentara Healthcare board of directors. File photo.

A Suffolk visionary was honored on Wednesday in the halls of the hospital he helped build and lead to prosperity.

Conference rooms that date back to when the hospital first opened at its Godwin Boulevard location in 2002 were named after Glasscock to recognize his contributions to both his hospital and city.

“Sam has got a long history of service to the Suffolk community in many ways, and especially to this hospital,” said Dr. Steve Julian, president of Sentara Obici Hospital.

Glasscock was humbled by the gesture.

“I did tell Steve that when I come back in my next life, I’m going to have a shorter name,” Glasscock joked.

Glasscock was elected to the Louise Obici Memorial Hospital Board of Directors in 1966, on which he served until the hospital merged with Sentara Healthcare in 2006. He served as chairperson for 25 of those years.

“He’s a very skilled attorney, draftsman and communicator, and it’s been great working with him,” said Suffolk’s George Y. Birdsong.

He oversaw many additions to the original North Main Street location, such as the expansion of the emergency department, a medical office building for physician specialists and adding a radiation oncology suite so residents didn’t have to travel to Newport News or Norfolk for cancer treatment.

When talks began for the hospital to relocate, Glasscock argued to keep it near downtown and in proximity to the bus line for the convenience of patients. Howard Kern, president and chief executive officer of Sentara Healthcare, admired Glasscock’s community commitment.

Glasscock kept Suffolk in mind when he pushed for the merger between Obici Hospital and Sentara Healthcare. Both the hospital and the community were proud of its independence. But the quality of patient health care came first.

“We came to the conclusion that a small, independent hospital simply couldn’t do a good enough job,” he said, adding that Sentara was the “natural” partner they needed to serve the city.

That $130 million deal paved the way for better health care and economic growth for more than 20 years.

According to Julian, Glasscock was able to drive that partnership through inquisitiveness and persuasion.

“He’s always looking forward, always thinking about the next thing we need to provide, and he has a manner of doing it that is non-threatening,” he said. “He can ask the question of, ‘Why can we not consider doing it another way?’ in a nonthreatening manner.

“Rather than being rocked back on their heels and offended, it gets them thinking, ‘Well, just because we’ve done it this way for 20 years, maybe we should consider a different approach.’”

Julian wondered if it came from his law background.

“If you’re going to do a good job and try to find out what the truth is, you have to ask the hard questions,” Glasscock said. “You have to ask how can we do it better. Ask if this is the right way, or can we improve it in some way.”

He was quick to argue that there were many others that contributed to the hospital’s success all these years, and that he was just one man that ended up with too much of the credit.

Tom Woodward, who served on the hospital board with Glasscock, had a different opinion on the man he described as a “quiet giant.”

“The merger, as it’s called, took hundreds of hours, and it was through his guidance that not only this hospital was built, but that the merger was successfully accomplished,” Woodward said. “But for him, I’m not sure any of it would have happened.”