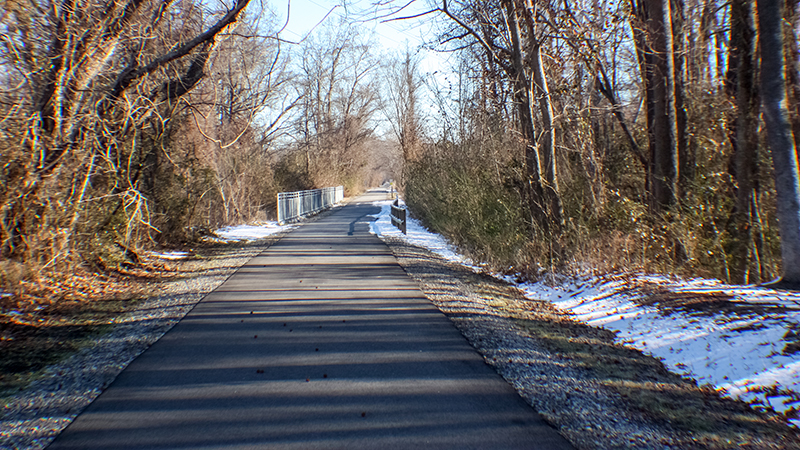 The Suffolk Seaboard Coastline Trail features several miles of scenic vista and a 10-foot-wide path for walkers, runners and cyclists as well as their four-legged friends. (Angela Bruzzese-Boyce Photo)

A popular trail for runners, cyclists, outdoor enthusiasts and more stayed busy despite a bitter winter, according to recent measurements.

Eco Counters were installed on the Suffolk Seaboard Coastline Trail in October about a quarter-mile from the Driver trailhead, according to Helen Gabriel, Suffolk Parks and Recreation assistant director and the project’s manager.

These sensors can detect pedestrian traffic on foot, biking or even with dogs in tow. The results are transmitted remotely and analyzed by Suffolk Parks and Recreation to evaluate visitation trends. Some have also been installed at Lake Meade and Lake Kennedy parks, Gabriel said.

The Seaboard Coastline sensors counted a daily average of about 61 runners and walkers, plus six or seven cyclists, between Jan. 1 and Jan. 12, Gabriel said. Saturday and Sunday are unsurprisingly the most active days for the trail.

Gabriel said this data substantiates the popularity of the trail, which will make a difference when applying for grants.

“Numbers are showing that these trails are definitely being used, and that they’re a strong force in the city,” she said.

The Suffolk Seaboard Coastline Trail opened the first 2.3 miles of its paved pathway in October 2015. The trail is part of the 41-mile South Hampton Roads Trail project that will allow non-motorists to travel from downtown Suffolk to the Virginia Beach oceanfront.

The 10-foot-wide path has a trailhead in Driver that features amenities for trail users, such as a picnic table, portable toilet and bike repair station.

Families walk the path during the winter and enjoy the scenery. It’s a popular place to hide and find painted rocks for the Suffolk Rocks movement.

Suffolk resident Lisa Jahnke, 56, has been an active runner since 2010. She said having this trail is far more convenient than driving to Newport News or Virginia Beach, plus she enjoys the annual StrongWILL 5k Run and Walk on the trail during the Driver Days festival.

“I would love to see more races in our region, because that brings more people to our community to see how beautiful it is,” she said.

Her blog lisasfavoriteplaces.com features photos of the trail in crisp weather, highlighting the trees and open fields that are lush in warmer weather.

“You don’t realize you’re in the city because of the beautiful views,” she said.

The company worked on the design for the trail extension from the Driver trailhead to just beyond Shoulders Hill Road, according to Ian Johnston, Virginia Beach transportation department head for Clark Nexsen. The next phase will be a 10-foot-path between Suburban Drive and Nansemond Parkway.

“If everything went well with the design and site plan review, we would hope to be in construction possibly in the spring or summer of 2019,” Gabriel said.