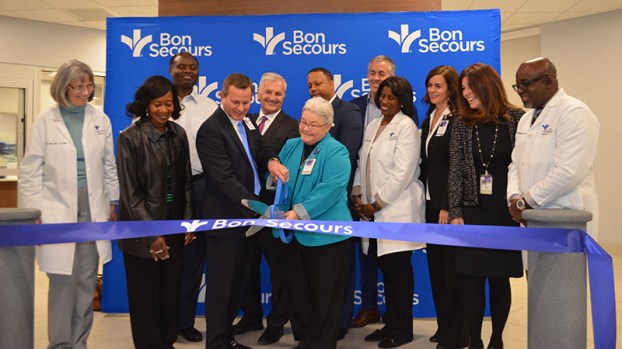 Chesapeake representatives met with Bon Secours Medical Group leaders and staff to cut the ribbon on a new asset to the Western Branch community and other Hampton Roads patients.

The official opening of Bon Secours Taylor Road was celebrated on Wednesday, a few months after the soft opening for the 30,000-square-foot, top-of-the-line medical office space at 2613 Taylor Road.

“The big thing is trying to get our services to where the people are, instead of having people come to hospitals where it’s inconvenient,” said Mark Nantz, chief executive officer of Bon Secours Hampton Roads. “It’s about convenience for the patients and providing access to them where they live, and I think this location fits the bill on both counts.”

Patients also enjoy the convenience of short walks to further stages of treatment, such as those treated by Bon Secours Occupational Medicine, which served more than 6,000 Hampton Roads patients in fiscal year 2017, according to a December press release.

While Western Branch Primary Care treats the old and young on the second floor, occupational medicine and physical therapy is available in a short walk to the first floor. According to Rehab Manager Rachel Everett, the facility has received about 80 new patients monthly since its soft opening on Nov. 13.

“In the back of the doctor’s head upstairs, they know that we’re available and that they can get the patients to us a lot faster in order to get them started,” said Clinical Supervisor Roland Butler Jr. “The faster they’re able to get started, the faster their rehabilitation is.”

“I’m very excited, and I know this community is very excited to see Bon Secours willing to invest their capital in a vibrant community that’s prime for further growth,” said Chesapeake Mayor Rick West. “I think it’s a good match between the investment that Bon Secours is putting in a place like this and how Western Branch is growing.”

Councilwoman Ella Ward said that there’s a substantial elderly population in Western Branch that will benefit from this investment. She also considered the influx of patients from neighboring cities.

The long-anticipated date has arrived for members of the Southeastern Public Service Authority. On Thursday, a multitude of changes go... read more