Cyclist awarded for dedication towards a cure 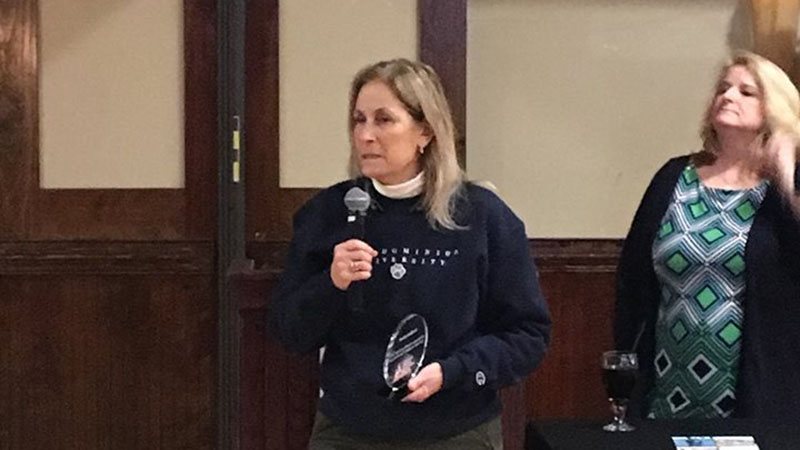 Helen Gabriel has participated in the American Diabetes Association’s Tour de Cure event for more than a decade, and the cyclist was recently honored for her commitment and support.

The association announced its inaugural Tour de Cure Volunteer of the Year Award on Jan. 18 to more than 150 people at the Tour de Cure Kickoff event in Portsmouth. Gabriel was stunned when her name was called.

“I got choked up and had a hard time talking for a few moments,” she said in a phone interview on Thursday.

She rides for her mother, Loulla Gabriel, who passed away on Nov. 22, 2005. Her mother was a diabetic who suffered kidney failure and required dialysis. She was also a double amputee.

She rides to support research for a cure, for the diabetics riding alongside her and to raise awareness for others that are predisposed to diabetes like herself.

As assistant director of Suffolk Parks and Recreation, Gabriel has been invaluable in making sure the Tour de Cure routes are clear of potholes and other obstructions since the event moved to Suffolk six years ago.

She serves on the planning committee, co-captains one of the largest teams and is a dedicated participant who raised nearly $4,000 in 2017.

“She is well-respected by her peers and in the community she serves, and she is a wonderful asset and friend to the American Diabetes Association,” Tour de Cure Event Chair Arlene Sadoff said when she presented Gabriel the award.

The Tour will be held for the first time at the Suffolk Executive Airport, rather than King’s Fork High School, which had hosted the event for the last six years. Gabriel is excited to ride 100 miles on country roads over rolling hills and past gorgeous lakes.

She’ll be think about her mother each and every mile.

“She’s always on my mind, but it’s a little extra special that day,” she said. “Every mile that you ride, you think about those that can’t.”

The 2018 Hampton Roads Tour de Cure will take place on April 28, beginning and ending at the Suffolk Executive Airport. The route options are 10, 25, 65 or 100 miles. There will also be a 5K run and walk for those that don’t wish to ride.