Tara Grady, daughter of Phyllis and Chuck Grady of Suffolk, has earned the Girl Scout Gold Award, the highest honor and achievement a girl can earn in Girl Scouting. Tara has been a Girl Scout for nine years and is a student at Nansemond River High School.

For her project, Tara created an awareness campaign to teach others about Tourette syndrome. Titled “What Makes Me TIC,” Tara’s project aimed to create a better understanding and acceptance of the disorder.

“I did this by conducting presentations for faculty at multiple local schools,” Tara said. “By educating teachers, not only am I impacting how they see the disorder, but I am able to reach all of the students they have in their classrooms going forward.”

Tara said she also hoped that by educating others, those who lived with the disorder wouldn’t be bullied because of their tics. Tara also gave presentations on her project and the disorder outside of schools and even created an online support community, called Teens that Tic, which has nearly 200 members in states and countries across five continents. 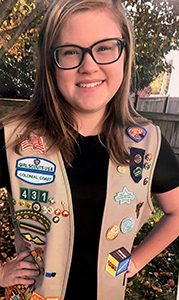 Tara hopes that her project will be sustained by the teachers to whom she presented. After she graduates, another student has agreed to moderate the online support community she created.

The Gold Award requires girls to identify an issue in the community and carry out a Take Action project to address the matter through leadership work. Nationwide, less than 6 percent of eligible Girl Scouts earn the Gold Award, which adds Tara to an elite group of female leaders across the country with the honor.

Cyclist awarded for dedication towards a cure