Madison Inscoe was lights out from the plate in the Lady Saints’ 14-0 win Thursday. 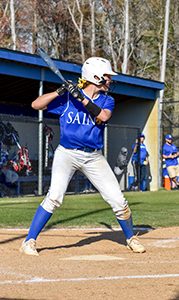 Madi Wilson had four hits to go along with two doubles and a triple against Cape Henry Collegiate on Thursday to push the Lady Saints to 12-0. (Jennifer Groves Photo)

The Nansemond-Suffolk Academy softball team went on the road and faced Cape Henry Collegiate. The team added its 12th win of the season and its third consecutive shutout. Inscoe pitched five innings and struck out 10 batters. NSA totaled 22 hits and had four players have at least three hits. Emerson Puzey added a home run. Madi Wilson led the team with four hits and added two doubles and a triple. Anni Groves and Reese Byrd added a double as well.

The first inning was the most productive for the Lady Saints, as they put up nine runs. From there, they started to pile on runs and secure their 12th win of the season.

NSA was slated for four games this week and have already won three of their four. In this week’s Virginia Independent Athletic Association Division II state poll, NSA remained the No. 1 ranked team.

NSA will face Manteo High School on the road at 11 a.m. Saturday.