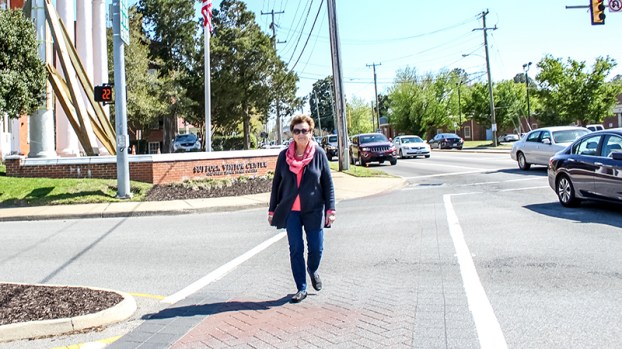 Mary Ann Riddick crosses the street at the intersection of North Main Street and Constance Road on Friday afternoon. City traffic engineers recently changed the light cycle at the intersection so that pedestrians cross while traffic flows in the same direction.

The city says traffic should flow more quickly through the intersection of North Main Street and Constance Road following a change to the cycle made last Saturday.

Prior to the change, traffic at the intersection came to a complete stop so that pedestrians could cross in all directions at the same time whenever a pedestrian had pressed one of the available buttons.

“In the past, we used to have a number of locations in downtown that operated under what they call exclusive pedestrian movement,” said traffic engineer Robert Lewis. “We stopped all the traffic and let pedestrians go in any direction they want. Very few places in the country do it.”

The new traffic pattern at the intersection should help relieve congestion, and having concurrent pedestrian walkways doesn’t cause any safety concerns.

“It was getting to the point where we were having larger backups at Constance and Main. Then you get pedestrians that press the button and cross before it changes,” said Lewis. “Everyone was calling me about it, and the change has made a dramatic impact on the operation of traffic.”

Having concurrent pedestrian walkways dramatically lowers the time spent sitting at the stoplight.

“It penalizes the people driving down the road, because it is telling all the vehicles they have to sit still for 30 seconds or even up to a minute for pedestrians to move across the street,” Lewis said. “In addition to sitting still, they have to run through the light cycle to get through. Sometimes they have to sit for three minutes before moving.”

Lewis said the change would have been made eventually, because the trend was to get rid of exclusive pedestrian walkways. The intersection at Main and Constance was the last one in the city to make the switch. Concurrent walkways are the standard nationwide.

Making the change won’t be a large safety hazard, according to Lewis, because most pedestrians have come to expect that type of intersections.

The city closed down the stoplights temporarily on Saturday to make the change.

“We have been working on and off for 30 days, and we only made the change this past Saturday,” Lewis said. “We did it on Saturday morning because there was less traffic and less of an impact when we turned the lights off.”

Since then, the traffic engineers haven’t received any calls about the intersection, which Lewis sees as a good thing.

“I only get calls when they don’t like something, so getting no calls is very positive,” Lewis said.

Oakland Elementary School received a helpful donation for the school library from the Junto Woman’s Club of Suffolk on April 10. The... read more