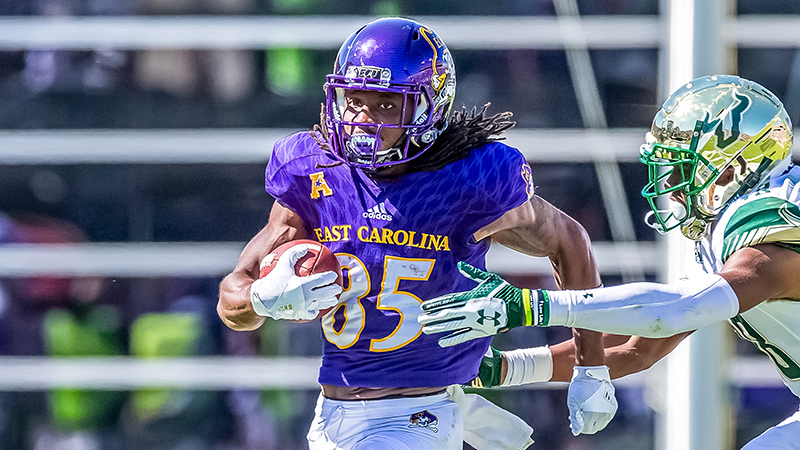 Davon Grayson could be the second Suffolk native in as many years drafted to the NFL this weekend. (ECU Sports Photo)

Davon Grayson could be the second Suffolk native in as many years drafted into the NFL this weekend.

The 2018 NFL Draft is here and will be taking place Thursday through Saturday. Grayson, a former standout at King’s Fork High School, could be preparing for a life-changing opportunity.

He could possibly be the second Suffolk native drafted in two years after his friend, Chuck Clark, was drafted in 2017 in the sixth round. Many national draft pundits have him labeled as a third-day pick or a high-priority undrafted free agent. Day three, in draft terms, mean either a sixth- or seventh-round pick.

At East Carolina University, he was one of the most productive receivers in the school’s history. However, injury concerns have been a common theme in everything that has been said about Grayson’s stock. Smooth route-running, a decisive runner after the catch and strong hands have been some of the common descriptions used to describe Grayson. Lance Zierlein, an NFL.com draft analyst, had this to say about Grayson:

“Grayson is a thin outside receiver with a good combination of speed and athleticism whose resume is lacking in production. A back injury in Grayson’s history will be a red flag that teams will have to dig around on and be comfortable with. Grayson has the athletic ability to get some separation in tight quarters and may have the ability to work all three levels of the field. Grayson flashed intriguing ball skills and competitiveness on his 2017 tape and may hear his name called on Day 3 of the draft.”

At the NFL combine back in March, Grayson ran a 4.5 40-yard dash and caught the ball well. At his pro-day in March, a scripted workout for scouts, he talked about how teams liked his speed and wanted to bring him into their facilities to evaluate him more. It has been reported that during his draft process, he has worked out for or visited the Los Angeles Chargers, Arizona Cardinals, Dallas Cowboys and Detroit Lions, among others.

In his career at ECU, he was fifth all-time in receiving yards, eighth in receptions and ninth in touchdowns. His time at King’s Fork saw him making plays for the Bulldogs on the field and on the track.

Whether his name is called this weekend or he gets to choose his own destiny, it is likely the Suffolk native will be a professional NFL football player when all is said and done.