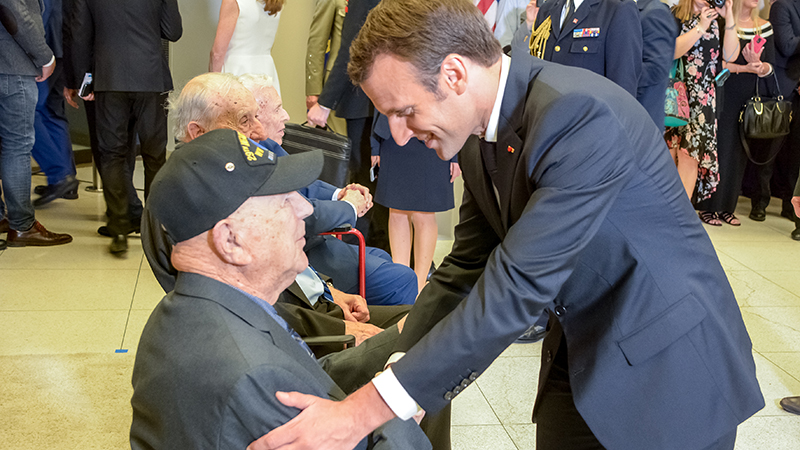 French President Emmanuel Macron greets Robert “Jack” Ewald in Washington, D.C., this week. Macron presented Ewald and other World War II veterans with the Legion of Honor, awarded on behalf of the head of state to deserving citizens. (Photos courtesy of the French Embassy)

A Suffolk World War II veteran was honored by the president of France this week with one of France’s highest distinctions.

Robert “Jack” Ewald, 92, was invited by Virginia Congressmen Bobby Scott and Donald McEachin to attend French President Emmanuel Macron’s address to Congress in Washington, D.C., on Wednesday. Ewald fought in the Army’s 115th Infantry Division and stormed the beaches of Normandy in the D-Day invasion.

On Tuesday, Macron honored Ewald and fellow World War II veterans Stanley Rzucidlo and William Barr with the Legion of Honor, which is awarded on behalf of the head of state to “the most deserving citizens in all fields of activity,” according to the Grand Chancellery of the Legion of Honor.

“Since 1776, we, the American and French people, have had a rendezvous with freedom. With it comes sacrifices,” Macron said in his Wednesday address. “That is why we are very honored by the presence today of Robert Jackson Ewald, a World War II veteran.

“Robert Jackson Ewald took part in the D-Day landing. He fought for our freedom 74 years ago. Sir, on behalf of France, thank you. I bow to your courage and your devotion.”

Ewald, who described himself as a “plain ol’ boy from Suffolk,” was humbled by the honor.

“It was really impressive,” he said in a phone interview. “I was almost at a loss for words, which is unusual for me.”

On June 6, 1944, Ewald was one of 160,000 Allied troops who landed along a 50-mile stretch of Normandy coastline, he has told the News-Herald for previous stories.

More than 9,000 Allied soldiers were killed or wounded on that beach, but Ewald was one of the 100,000-plus men that made it through. They advanced to the town of Saint-Laurent-sur-Mer, but the men couldn’t crawl over the untamed hedgerows, where narrow openings were covered by German snipers.

After Ewald and his unit had fought for nearly two months in the hedgerows, the 9th SS Panzer Division captured Ewald and others in his company. He then endured nine months in four German prisoner-of-war camps.

“Mr. Ewald’s bravery in service to our country and to defend our freedoms is an example to all,” McEachin stated in a press release. “We are incredibly appreciative and humbled by his service.”

Russians liberated the last camp, and the POWs were terrified of being brought into Russia with little hope of return, so Ewald and two of his comrades — one from Kentucky and the other West Virginia — escaped under the fence during a German strafing attack.

Ewald and his comrades hiked 60 miles to the American line, passing through several towns before coming across a Shell gas station. The old man and woman in the building let them sleep in the barn out back.

They piled into the hayloft, their stomachs swollen from a combination of dry oats and water. They were then discovered by three Russians. The senior of the three, a lieutenant, wanted them captured.

But Ewald managed to convince the sergeant that he knew an uncle of his in Chicago. His bluff worked, and the sergeant lobbied for their freedom. The Russians left them in peace.

“Jack’s incredible life story embodies the very best of our country,” Scott stated in a press release. “I am very pleased that more people were able to learn more about his service and sacrifice that helped free Europe from tyranny.”

Ewald recalled his time in France after he made it off the beaches. He remembered passing destroyed homes with families in front of them, holding flowers and waving at him and the other men as they marched on.

“They didn’t have to do that,” he said. “They just lost their house, but they didn’t care. They were glad to see us.”