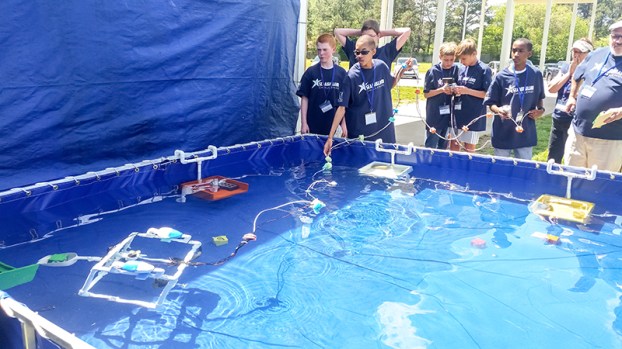 The John Yeates Middle School team practices its aquatic robot in a water tank at King’s Fork Middle School during the Sea, Air and Land Challenge on April 28.

The suspense was almost too much to bear for Jermaine Austin and Trinity McRae as they worked on one side of a tarp at King’s Fork Middle School on April 28.

On a table in front of them was a control panel and a screen. On the other side of the tarp was a water tank, and inside the tank was the aquatic robot the two Lakeland High School students were controlling. Attached to the robot was a camera, so Austin and McRae could see where the robot was going.

But although the robot ultimately didn’t perform the task it set out to do, their teacher, Sarah McDonald, was impressed. 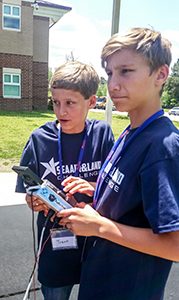 Trent Sterner and Jason Cooney of the John Yeates Middle School team practice controlling the aquatic robot their team built during the Sea, Air and Land Challenge on April 28.

“It was amazing to watch this,” she said. “I can’t teach this in the classroom.”

Lakeland was one of 10 teams participating in the Sea, Air and Land Challenge at King’s Fork Middle on April 28. The multi-state program is sponsored by the Office of Naval Research and was developed by the Electro-Optics Center at Penn State University.

The teams worked since November or December to design and build robots that could compete in predefined challenges that mimic the missions encountered by military, first responders and national security agencies. They also had to raise funds for all of the costs needed to build the robots.

As the name of the contest indicates, teams could choose to build a landlubbing robot, a seafaring robot or a flying robot — a drone, essentially.

Most of the teams were from Suffolk Public Schools, but a few represented Norfolk Technical Center. This was the first year there was a middle school division in any Sea, Air and Land Challenge, and Forest Glen, John F. Kennedy and John Yeates middle schools all participated along with Lakeland and King’s Fork high schools.

Members of John Yeates Middle School’s aquatic team said they learned about more than just robotics during the preparation for the competition. Teamwork and perseverance were two commonly mentioned values.

“It’s important to work with others, because they could give some helpful information to you, which might help spark another idea or a good way to solve a problem,” said Trent Sterner, an eighth-grader at John Yeates. “Through your determination and perseverance, you have to keep pushing through your problems and obstacles that come along during your engineering, because if you don’t, it will just fall apart super-fast.”

“Even though you can do it by yourself, it’s better to have people to do it with, so you can all combine your ideas to have a really good idea,” he said.

During the day of the competition, Master Chief Steve Gonzalez, a retired Navy SEAL, shared his experience in a career influenced by robotics. Special Agent Mark Guyer of the Virginia State Police was also on site, inspiring the students with demonstrations of one of the state’s bomb-seeking robots.

“Sometimes, we have to go outside our comfort zone as educators,” Kubinak said. “They’re showing us what their interest is. They love to code; they love to build; they love the process of engineering. As teachers, we get a chance to fill in the blanks.”

Suffolk Public Schools Technology Specialist Christine Lafferty was instrumental in bringing the program to Suffolk after hearing about it through her sister-in-law, who works at Penn State.

“She’s been telling me about this program for three years,” she said. “Coding, electronics, STEM, robotics — it’s coming at us at light speed.”

Lafferty said the end goal of the Sea, Air and Land Challenge isn’t winning the competition.

“It doesn’t matter whether they win or not,” she said. “It’s all about that journey. You can see learning all the way through.

“Whether they get into robotics or not, that’s a skill they will take with them.”

The clouds were dark and ominous over the Driver community as hundreds gathered around the elementary school Tuesday evening, but... read more