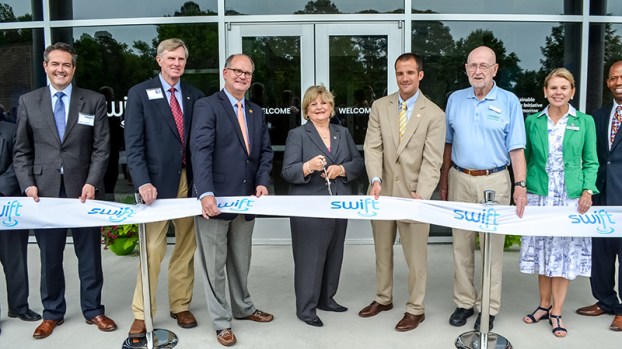 Cutting the ribbon on sustainable hope

Under overcast skies and wind gusts with a bit of rain, more than 150 industry, government and community partners gathered at the Nansemond Water Treatment Plant on Friday to cut the ribbon on the next step in the Hampton Roads Sanitation District’s Sustainable Water Initiative for Tomorrow.

SWIFT, as it’s known by its acronym, is a $1.1 billion initiative designed to support a sustainable source of groundwater for current and future needs in eastern Virginia. Crowder Construction Company broke ground on the $25 million SWIFT research center at the Nansemond Treatment Plant in North Suffolk in March 2016, which began pumping SWIFT water into the Potomac Aquifer earlier this week.

The Potomac aquifer along the Virginia coast is several thousand feet thick with hundreds of trillions of gallons of pressurized water, but that pressure has steadily diminshed after more than a century of unsustainable water withdrawals. This has caused land to sink as the aquifer has compacted — called land subsidence — and increased the potential for salt water contamination with the relative rise of sea levels. 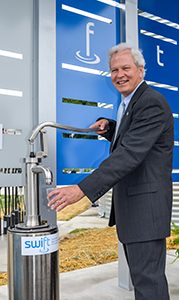 The SWIFT project takes HRSD’s treated water that would otherwise be discharged into the Elizabeth, James and York rivers and puts it through additional treatment to produce quality drinking water that attendees themselves enjoyed on Friday. The Carbon-Based Advanced Water Treatment process used at the facility was tested in the 2016 SWIFT pilot project at the York River Treatment Plant.

“This is the type of thing that we as a public policy body need to get behind, to work with the pilot project and hope that it will begin making steps to return us to the other direction we need to go,” Virginia Sen. T. Montgomery Mason said.

The water processed at the research center is treated to match the existing groundwater chemistry, then it’s injected into the Potomac aquifer. This is projected to slow, halt and possibly reverse land subsidence in the region, increasing pressure in the aquifer, which will also combat saltwater intrusion.

“Our use in the Tidewater area of the groundwater has been depleting the pressure directly underneath us, allowing the saltwater influence of the aquifer under the ocean to start migrating,” said Tyler Nading, project technologist with Jacobs, the strategic technical advisor for the project. “By recharging the water, we can boost the pressure directly underneath us and keep the saltwater out.”

The SWIFT initiative is also expected to reduce the amount of nutrients that HRSD discharges into the Chesapeake Bay — such as phosphorous and nitrogen — by 90 percent.

“All of us sitting here today know the very real importance of the Potomac aquifer and more importantly the importance of a clean and healthy bay,” Johnson said. “The Chesapeake Bay is really one of the jewels of this country, and we need to be protecting it each and every day.”

The U.S. Geological Survey’s 2,000-foot deep extensometer at the Nansemond Plant will measure the rate of water pressure change in the aquifer from replenishment. Data will be collected and analyzed to design full-scale facilities throughout the region.

HRSD is working to obtain necessary approvals for the first full-scale SWIFT facility in 2020, which will be capable of adding 8 to 30 million gallons per day. The goal is to finish the facilities needed for full-scale operations to recharge the Potomac aquifer with more than 100 million gallons of SWIFT water daily by 2030.

Looking ahead to the future, HRSD General Manager Ted Henifin discussed the serendipity of the ceremony happening during the sixth annual National Infrastructure Week.

“In D.C. and around the nation, hundreds of organizations and thousands of leaders are uniting under one message: the future won’t wait and neither can we. It’s time to build,” Henifin said. “Swift is all about the future. A future that can’t wait. The future vitality of eastern Virginia hangs in the balance.

“We are not waiting. We are moving swiftly into the future of water.”

Shining a light on forgotten screwpiles