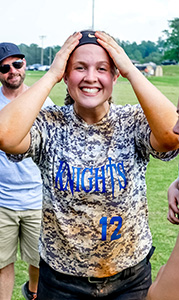 Penelope Franklin was voted the Suffolk News-Herald Player of the Week after a big game to help Suffolk Christian Academy to a national championship. (Submitted Photo)

Penelope Franklin was voted the Suffolk News-Herald Player of the Week after a big game to help Suffolk Christian Academy to a national championship.

The SCA softball team recently went out to Tennessee for the National Association of Christian Athletes tournament. They came back with a title and an impressive performance by the SCA junior. Franklin went 4-4 with three runs and two RBIs in a resilient effort to help her team achieve a championship.

Franklin knew it was time to play her best and help her team that entire week, and she did. She ended up with a batting percentage of .900 for the week.

“I just went out there and did my part,” she said. “My mentality for that week was just to put the ball in play, and it worked pretty well. I was just trying to do my job and stay consistent and get base hits, and I was able to help my team win. All in all, I felt like I had a great offensive week.”

Her offensive firepower helped her make the All-Tournament team and become the MVP. For the most part, she was happy with what she was able to accomplish offensively for the team this season.

While getting ready for her junior season, Franklin new SCA had a chance to be better than what they were in recent seasons. The team worked hard, and it all paid off for them in Tennessee.

Franklin is the ultimate competitor. When she steps on the field for game time, it is serious business. She set goals for herself this season and has exceeded them. Last year, she didn’t quite have the season offensively that she wanted, so she came back this year better. Overall, she wanted to improve especially while playing the shortstop position, and she felt like she did that.

“My mentality when I step on the field is to play a good game and do what I can for my team,” she said. “For me that means motivating other people, calling plays in the field and doing my part batting.”

Being a co-captain of the team is something the Lady Knight junior takes pride in. She sees it as a serious responsibility and as an opportunity to lead by example on the field to help elevate her team’s game as well.

“I most certainly try and grow on that responsibility whenever I can, mostly by observing my teammates and seeing how they respond to my leadership.”

Her coach, Robbie Lester, motivates her along with her father, Rhett Franklin, who is also a coach. She knew Lester was so proud of what the team was able to accomplish in Tennessee, and she was happy to contribute to that. Her father is her competitive motivation and pushes her to succeed on the field.

“The both of them put so much work into the team and into my success, and they will always be a big source of inspiration to me.”