The Nansemond-Suffolk Academy softball team had six players make the All-State team this season and also had a Player of the Year honoree.

NSA had a strong season again this year. They only lost three games this season while competing all the way up until the Virginia Independent Schools Athletic Association Division II state semifinals. They were rewarded for their strong season in the post season accolades. 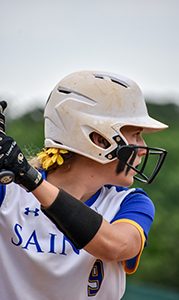 Madi Wilson leads the list for NSA, as she was named a Player of the Year, tied with Jaycee Ruberti of Greenbrier Christian Academy. Wilson finished the season with 36 hits, 31 runs and 27 RBIs. Wilson also had two home runs to go with 10 doubles and five triples as well as 157 put-outs. This is the second consecutive year that NSA had at least one player earn the Player of the Year Award. Emerson Puzey was the awardee last season.

“I feel very excited and honored,” Wilson said. “I was very fortunate to have a great season, and I am grateful for my coaches and my teammates. I am sad it’s all over, but I’m proud of how well we did this season.”

Coach Brittany Thornburg has called Wilson the ultimate teammate and everything that a coach could ask for. As a senior, she was one of the true leaders on the team and was described as the backbone of the team.

Puzey, Addy Greene and Madison Inscoe were all first team all-state selections. Greene had 40 hits, 38 runs and 24 RBIs to go with two home runs on the season. She also led the team in stolen bases. Puzey had 20 hits, nine runs and 19 RBIs and had a pitching record of 7-0, which included four shutouts. She followed her Player of the Year award last season with a first team all-state finish. Inscoe had 30 hits, 26 runs and 21 RBIs to go along with two home runs and seven doubles.

NSA spent most of their year ranked top two in the VISAA poll.