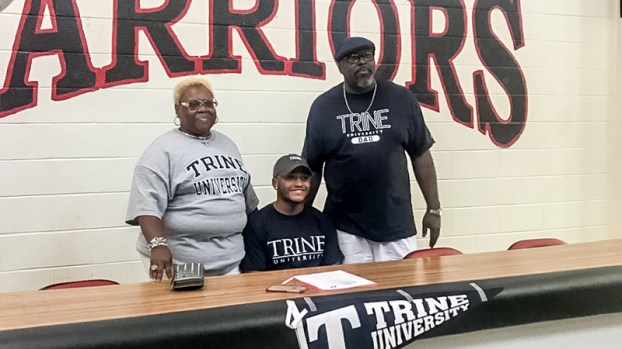 Malachi Middleton celebrates with his parents, Terrence Middleton and Avis Middleton, as he signs to play football for Trine University. (submitted photo)

With the signature, the Nansemond River High School football program added yet another student-athlete to its list of college-bound players. After having a historic year last fall, the Warriors have seen a great number of seniors have an opportunity to go play football in college.

Middleton said his recruiting process went well, and it came down between Trine and Shenandoah University before he ultimately chose Trine. Playing in college has always been a dream for Middleton, and he will be the only person in his family to have to opportunity to go on and play college football.

“When I visited Trine, they made me feel like part of the family,” he said. “My parents were also really comfortable with sending me there. My family played a big role in helping me deicide what was best for me. They are proud and blessed that I am able to go on to the next level and play the sport I love.”

It was important for Middleton to take his time making the right choice, which is why he finally put ink to paper late into the school year. Trine is located in Indiana and is an NCAA Division III school.

“I wanted to make sure I was 100-percent ready to make my decision and that I was comfortable with my decision,” he said.

While Trine was recruiting Middleton, they made sure to let him know they prioritize academics over anything else. They want him to focus fully on school first, and then football comes second. He has plans to major in computer science.

Nansemond River advanced all the way to the state semifinal game last fall, and Middleton felt grateful to be a part of such a historic season for the Warriors. He wanted to be as healthy as he possibly could throughout the season while also having postseason success, and he was able to accomplish those goals.

“This last season was great,” he said. “We won regionals for the first time since 1993, and I became close with all of those guys. They all became my brothers.”