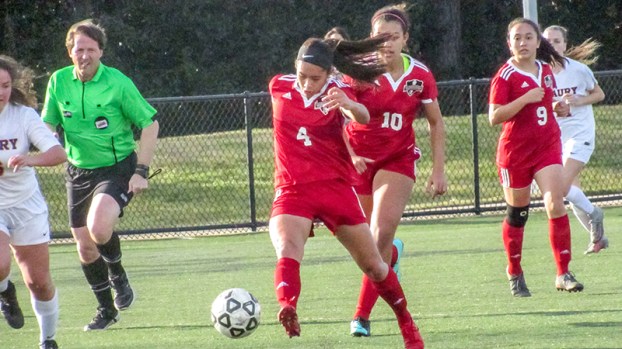 Sarah Rhiel was a second team All-Region selection for the Lady Warriors this season.

The Lady Warriors had another solid season under the direction of Coach Jonathan Baca. They made back-to-back regional tournament appearances but fell short each time of making the state tournament. Overall, there was some success in the Lady Warriors’ season, and it was evident by the postseason awards.

Indiah Hunter and Saleena Lynch were both first team All-Region selections. Hunter, who just finished up her senior year setting school records, had a strong case for the first team. She led the city in goals scored this season and was one of the top scorers in the region. Hunter has a strong case for the All-State teams as well. Those lists will be released in the next couple of weeks.

Lynch felt good about her season and felt like she built upon what she did last season.

“It was truly amazing and an honor to have been selected for All-Region and to be recognized in the sport I love playing,” Lynch said. “It was disappointing we didn’t get to states this year, but all of us played hard.”

Personally, Lynch accomplished one of her goals this season, which was to score more goals this year than she did last year and also to make first team. She finished with 10 goals, helping her case for All-Region.

“I felt like my play from last year was better than this year,” Lynch said. “I was able to be dependable offensively and defensively for my team, and I was able to accomplish some of the things I set out for myself. I wanted to be a game changer for my team and play my best every game.”

Both Rhiel and Lynch will be back next season for the Lady Warriors.

The Lakeland High School track and field team were within arm’s reach of a Class 3 outdoor state championship. The... read more