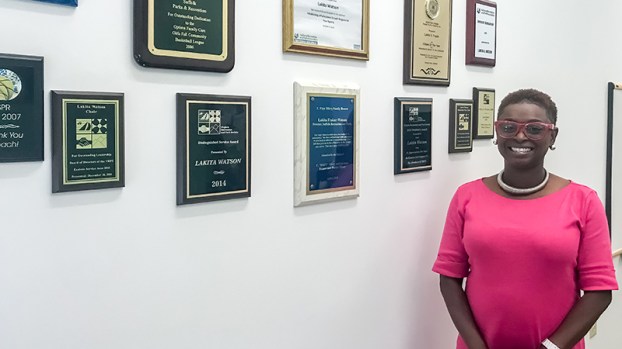 Suffolk Parks and Recreation Director Lakita Watson will leave the city later this month to take the helm at the Richland County Recreation Commission in South Carolina.

After an almost 24-year-long career with Suffolk’s Park and Recreation Department, Director Lakita Watson will be leaving on June 27 to be the new director for the Richland County Recreation Commission in South Carolina.

What started as a part-time job to get through college morphed into a professional career that Watson is proud of, and it is one to which she is sad to be saying goodbye.

“It’s like I am leaving my family,” Watson said. “This is a high performing organization and it pulls at my heart to leave. It has been great, part-time to full-time, and accomplishing so much. Now I have to leave and go do great things in a new place.”

Watson was an integral part of city government, and she accomplished a number of things during her tenure at Parks and Recreation. Her favorite accomplishment during her time as director was solidifying the funding necessary to renovate and open the East Suffolk Recreation Center.

“We were at a meeting, and they were saying that it was not going to happen, and I felt guilty. The alumni wanted to bring life back into the building,” Watson said. “So, we figured out what capital improvement projects weren’t moving and secured funding for the renovation of the building.”

The recreation center, which is the neighbor of her own office building, is one accomplishment that Watson is proud of.

“That ribbon cutting will stay with me,” Watson said.

Just as big was the ability to get the Parks and Recreation Department nationally accredited. The department is one of only 150 to have achieved the accreditation.

“We achieved the standard of excellence in 2017,” Watson said. “This didn’t happen overnight.”

While Watson is proud of her accomplishments in the department, she believes that the reason for success was from having a team that worked hard, City Council support and the hard work of City Manager Patrick Roberts.

“I believe I was able to, with my team, build a foundation for recreation, and having the City Council support physically showed their commitment and respect of parks and recreation,” Watson said.

The city has provided Watson with every opportunity for professional development, and she believes what she has learned will help her tackle her newest adventure in Richland County.

Watson was unanimously chosen in late May for the position by the recreation commission’s board members, and commission members believe she will bring a positive change to the commission and the county.

Richland County’s Recreation Commission has gone through hard times after its former executive director was accused of nepotism and charged with criminal sexual misconduct before retiring in 2016. He still has not been tried on those charges.

“It is going to be different, but a leader is only as good as the people they are leading,” Watson said. “I am looking forward to it.”

Richland County, measuring 772 square miles, is larger than Suffolk, but the county reminds Watson of Suffolk in many ways.

“You can drive down some of the roads, and it looks just like you’re in Whaleyville or Holland,” she said.

Naturally, Watson will miss her family just as much as she will miss the department. She has two children currently enrolled in Norfolk State and Virginia State University, and her youngest child will travel with her to South Carolina.

Watson will also be leaving her two sisters as well.

“We will have to figure out a new family dynamic,” Watson said. “God prepares us for things, and if He didn’t, He wouldn’t have sent me to South Carolina.”

Watson is prepared to make a fresh start and begin cultivating new relationships within the government and the community when she starts in July.

A handful of Suffolk police officers traded in their uniforms for running shoes to run the Flame of Hope across... read more