King’s Fork High School track and field team competed in the state meet over the weekend, and Kaia Young was able to bring home a state title.

It was an eventful weekend for the Bulldogs’ track and field team, as they were geared to compete in the state meet last Friday in Harrisonburg. However, due to weather, most of the meet was rained out Friday and Saturday. Due to that, KFHS had to drive to Harrisonburg on both Saturday and Sunday to finally be able to compete.

The rain actually turned out to be somewhat of a good thing for King’s Fork, which wasn’t expected to be at full strength because of prom. When the meet resumed, King’s Fork was able to have its key runners. 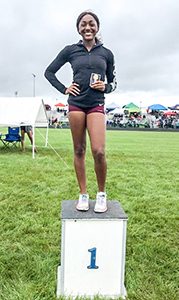 The biggest highlight coming out of the King’s Fork camp at the state meet was Young. The senior won the state title in the 300-meter hurdles with a time of 45.88. She came into the state meet slated at No. 2, and she knew she was going to have to push through. It left her in surprise after she crossed the finish line.

“When I crossed the finish line, I was in shock,” Young said. “Even when my teammates and coaches were cheering and congratulating me, I was still in shock. It was just a great feeling that I could finish off my senior year with a state title.”

Coach Shawn Warren said it was the most gratifying event for the Bulldogs this season. Because of all the traveling, rain and everything in between, Young had actually started overthinking about her race, but she remained focused.

“Kaia worked tremendously hard this season and put in a lot of extra work after practice to get her hurdle work in,” Warren said. “The conditions were less favorable because of the rain, but she was able to block all that out, focus and run a clean race and ended up with the state title.”

“This was the best way my senior year could have ended for me,” Young said. “Winning a state title is something I always wanted, and for it to happen now makes it so much better and special.”

After the meet was over, Warren talked with the team about the season and sent his seniors off.

“I have a real affection for this group of seniors,” Warren said. “They were sophomores when I came to King’s Fork three years ago. I have gotten the opportunity to watch them grow as people and as athletes. It’s been a really gratifying experience to be a part of their growth and maturation process. I’m going to miss them.”