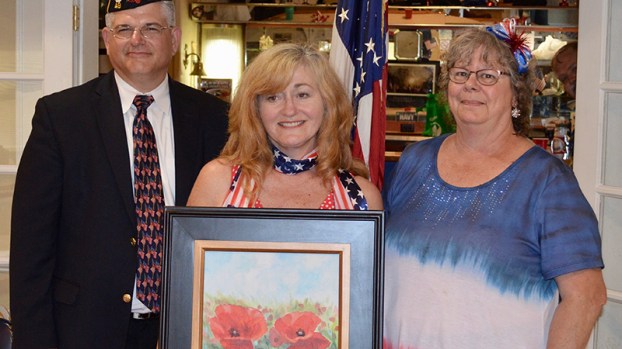 There were more than 100 in attendance, including 30 veterans who reside at the Hampton VA Center, who were recognized for their service. Post Adjutant Bob Hannon gave a tribute to fallen veterans from the first and second World Wars by describing the significance of the poppies that are traditionally distributed by the Legion and VFW to commemorate Memorial Day. He described the significance of the poppies that cover Flanders Field in Belgium, which became a final resting place for many U.S. fallen soldiers. He concluded with a reading of the famous John McCrae poem “In Flanders Field.”

Barbara Mastaglio, and Isle of Wight artist, was introduced to donate her painting “Fallen Comrades” to Post Commander Pat Connolly and Auxiliary President Shelley Riley. In her remarks, Barbara described how the painting reminds us of the great sacrifices made during World War I in Europe. The blue sky goes on forever representing hope for the future, the background small poppies the distant memory of those lost in battle and the two featured foreground poppies standing side by side representing our comrades who lost their lives together. According to Connolly, the painting will hang in the legion hall as a constant reminder of the American Legion’s heritage from those who fought in Europe, and the Post intends to use its image on future Post materials.

A Lakeland High School senior was among the “fabulous five” recognized on Friday for completing a rigorous program that prepared... read more