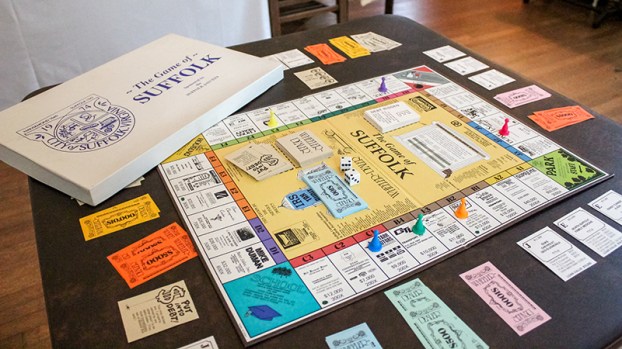 A “Monopoly”-style game distributed by the Suffolk Jaycees in the 1970s features Suffolk companies is one of the items on display at the Suffolk-Nansemond Historical Society’s new exhibit.

The Suffolk-Nansemond Historical Society has opened a new exhibit featuring mementos from Suffolk and Nansemond County’s past.

The exhibit, “Selling Suffolk — Then and Now,” features signage and other memorabilia from businesses that were once in Suffolk and from other businesses that are still in the city today — including Birdsong Peanuts, Lipton and the Suffolk News-Herald.

“This is my favorite exhibit because there are so many cute things,” said Executive Director Kimberly Blair-Greene.

Small trinkets are displayed in multiple glass cases. The historical society was able to provide a bulk of the items in the exhibit. The glass cases feature old advertisements, glass jars and cans from Planters Peanuts. 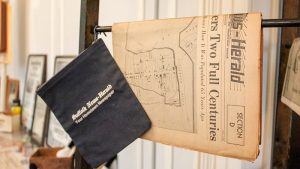 An old Suffolk News-Herald edition, along with the money bag carriers used to collect payments from customers is one of the items on display at the Suffolk-Nansemond Historical Society’s new exhibit.

There were two full collections on loan at the exhibit from Peter Pruden, co-owner of Taste Unlimited and Richard Elans, former Lipton executive.

Pruden provided a slew of objects from Suffolk’s history, and Elans provided a case full of Lipton artifacts and trinkets. Some of the items are more than 100 years old, according to Blair-Greene.

The exhibit features plenty from Suffolk’s history, and right in the center of the room is a “Monopoly”-style game once produced by the Suffolk Jaycees featuring Suffolk businesses on its board.

The game came out shortly after Nansemond County and Suffolk merged in 1974, according to Blair-Greene, and it features businesses like Paul D. Camp Community College, Obici Hospital, Mike Duman Auto Sales and Duke Automotive.

There were individual items donated from Suffolk locals. Lee King, member of the historical society’s Board of Directors, and Kermit Hobbs, the board of directors’ historian, provided small things for the exhibit. Karen Hughes also supplied a sign and advertisements from the Mulberry House, a trinket shop she used to own in Suffolk.

This exhibit comes just before Father’s Day, and Blair-Greene thinks this is a great thing to do for dads and sons.

“This is a great exhibit for the guys. They have their grandfathers that will remember some of this,” Blair-Greene said. “The items really speak to the guy group.”

The exhibit will be open until mid-September for those who want to come to visit at the Philips-Dawson House, 137 Bank St. The house is open Monday, Tuesday and Thursday from 9 a.m. to 3 p.m. and Friday 9 a.m. to 1 p.m.

A Lakeland High School senior was among the “fabulous five” recognized on Friday for completing a rigorous program that prepared... read more