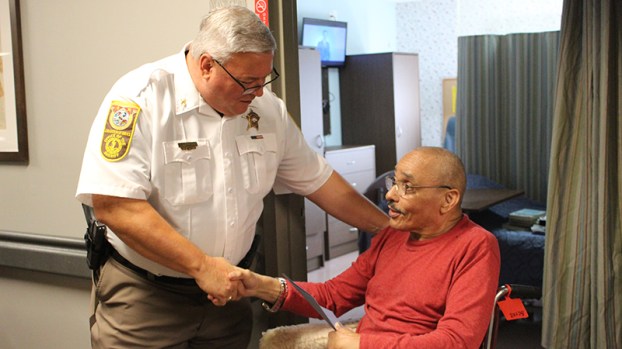 The Sheriff’s Office took a trip to Autumn Care of Suffolk Thursday morning to visit and celebrate Father’s Day early with some of the residents.

The Sheriff’s Office on Thursday gave out Father’s Day cards to the men at the facility, and they had just about 80 cards that came from students at Elephant’s Fork Elementary School. Some of the cards were even written in Spanish.

Sheriff E.C. Harris and three deputies — Wade Thomas, Ronald Whitley and John King — walked up and down the hallways making sure all of the men received a Father’s Day card.

“The residents love them, and they love when they come to the facility,” said Celeste Alston, activities coordinator for Autumn Care. “It’s very important to them.”

The deputies couldn’t make it far down the hallway without getting caught up talking to some of the residents and sharing stories.

“It’s just nice to see these folks smile,” King said. “They are glad to see other faces than the ones they normally see.”

The staff from the Sheriff’s Office finds themselves in the hallways of Autumn Care often, and during their Father’s Day visit they made sure to check on their “regulars.”

There are certain individuals that Harris makes sure to check on every time he comes to visit. Some of these people he has been visiting for years, and he even knows some of their family.

Even if some of the men weren’t in their room, the deputies made sure to place cards on their beds for them so they didn’t miss out in the merriment.

There was no shortage of smiles from the deputies, and they were excited to go into every room to distribute the cards.

“When you are doing something you love, it’s hard not to have fun,” said Thomas.

Jeb Bonnett, or Jeb the Butcher as he’s known to his customers, was recently awarded for his popular meat market’s... read more