The Mack Benn Jr. Elementary School first-grader was able to stand out among national competition last month. He competed in the U.S Beach Wrestling Nationals in North Carolina and took first place in the 46-50 division.

He defeated his opponent, Jake Geist, by decision in both matchups. Jolley is a member of the Smithfield Wrestling Club. Jolley earned his third first place finish of the year so far. In March, he took first in his division in the Virginia State Open Championships, and he also took first at the VA Kids Rookie Championship. 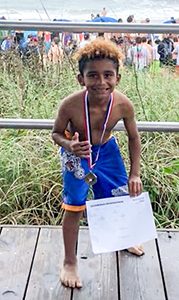 George Jolley IV celebrates his national wrestling title after the meet in May. He has learned from his older brother, Tristian, a rising senior at Lakeland High School. (Submitted photo)

“It has been great watching him progress in the sport,” Brian Jolley said. “It makes me a proud parent watching him work and reap the benefits of it by a national championship being attached to his name. George’s coaches over at Smithfield Youth Wrestling deserve all the credit for his success this season. They truly care about the children over there.”

Jolley started with Smithfield Youth Wrestling last year during the spring, and because of the standard of the program along with his individual work, it has led to some good things happening for him this year. His family believes he is just scratching the surface as a first-grader.

“What he is accomplishing now is great, but we want him to have fun and focus on gaining experience through both his wins and losses,” Jolley said. “George’s work ethic along with his coaches and their knowledge of the sport and networking and sacrificing has made a big difference this year.”

The young Suffolk native loves reading about wrestling and watching YouTube matches. His older brother, Tristian, is a rising senior at Lakeland High School and has wrestled there since a freshman, so he has grown up mat-side. The bond with his brother and his competitive spirit motivates him.

Team WAR is headed to North Carolina for outdoor nationals. For the last meet of the season, Nansemond River High... read more