Jeb Bonnett, or Jeb the Butcher as he’s known to his customers, was recently awarded for his popular meat market’s triumphs.

“We came over to a meat community to be a part of the proud heritage over here, and we’ve accomplished a considerable amount of achievements,” he said, wearing a jet-black apron and a pair of gloves. 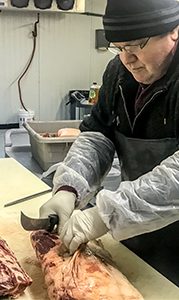 Bonnett smokes, cures and cuts his meat in-house. His wife, Chae, prepares Korean cuisine and their daughter, Lisa, bakes desserts. Together they’re known as “the butcher, the baker and the Korean food maker.”

At least 10 of their products have achieved the Virginia’s Finest designation, a trademark that promotes top-quality food products. Cherry smoked and country hams, cottage bacon, smoked sausages, beef jerky and even Korean dishes like beef and pork bulgogi are featured. Two of their seven barbecue sauces — Jeb the Butcher Pig-pickin and Jeb the Butcher Special sauces — also have the stamp of approval.

According to Bonnett, keeping it in the family keeps the quality consistently high.

“There’s a lot of proprietary property in what we’re doing, and the goodness of what we do is a reflection upon my family,” he said. “We can keep it how we want it. You lose control if you get too big.”

The seasoned butcher has thousands of followers on Facebook for his free meat-cutting instructional videos and pictures, and he spent last year improving his facility and practices to officially receive a USDA Grant of Inspection to produce products for wholesale.

But it wasn’t an easy task, he said.

“You have to give it everything,” he said. “Thousands of hours of hard work — physical and paperwork — and tens of thousands of dollars to have a facility that can produce safe, wholesale food for commerce. You can’t just do this out of your garage.”

The attached diner is temporarily closed as the family readies itself for grocery stores and the wholesale market. Above all, Bonnett wants greater recognition for their quality.

“That’s the biggest reward, hearing people praise your product when they don’t know you’re hearing them,” he said.

Hard truths about the Ironclads

The Monitor-Merrimac Memorial Bridge-Tunnel between Newport News and Suffolk is named after the historic “Battle of Hampton Roads,” but as... read more