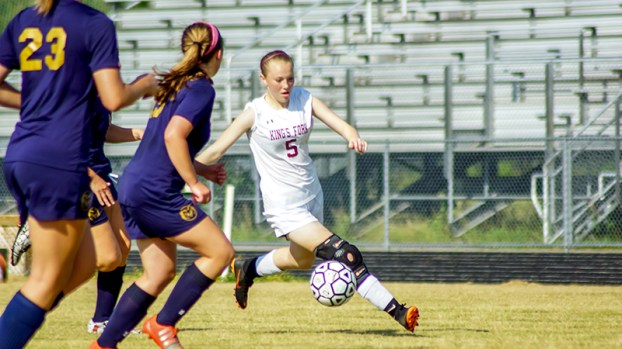 A half-dozen for the girls

Six Suffolk girls’ soccer players were selected to the All-District teams for their play this season.

Both King’s Fork High School and Nansemond River High School had representatives on the all-district teams.

King’s Fork had two standouts in Ashley Bido and Lonni Cox make the all-district team. Bido was a first-team selection at defense, and Cox was a second team selection at forward. Bido was also an All-Region selection and finishes up her high school career with some nice individual accolades. Cox will be returning next season.

Both Bido and Cox frequently spoke about how they are grateful for any accolade they may receive as an individual but know as well they owe credit to teammates and coaches.

“I feel great that even after my season was completed, I was able to earn these awards,” Bido said.

“I am glad to have made the all-district teams,” Cox said. “I definitely couldn’t have the success I have without my teammates. Without their help, I would not have had as many opportunities.”

Cox had one of her standout performances this season against Western Branch High School, where she scored four goals including one of which was the game-winner. She finished second in goals scored for Suffolk Public Schools girls’ soccer players with 18.

Nansemond River had four selections make the All-District team. Saleena Lynch was the lone first team selection, but Indiah Hunter, Sarah Rhiel and Kayleigh McQueen were all selected to the second team. For McQueen, it was her first season back after tearing her ACL the year before, and she was happy to be able to make a district team.

“I feel honored that I was selected,” McQueen said. “I felt I had a great season this year with this being my first year back from an ACL injury. The comeback is always stronger than the setback.”

After a strong rehab process, she felt good about jumping right back into where she left off before the injury. She mentioned that there were times she was nervous about playing without a brace on her knee, but she is confident in it now.

Hunter, Lynch and Rhiel were all All-Region selections for the Lady Warriors this year. Rhiel and Lynch will be returning next season, while Hunter will be playing NCAA Division I soccer for Old Dominion University. McQueen, Like Hunter, will be going to college to play soccer at Gordon State College.

Suffolk had five players selected to the Southeastern District softball teams this season. All three of the Suffolk Public Schools... read more