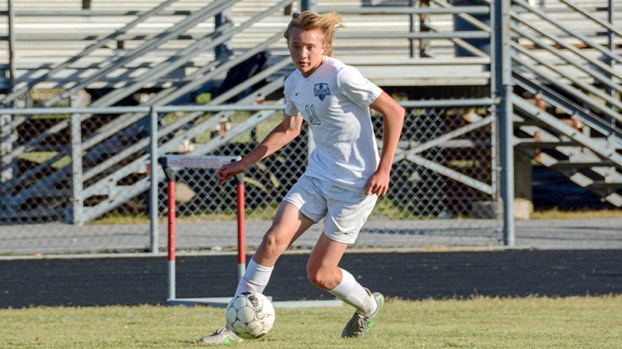 Seva Karlov was a second team All-District selection for the Warriors. He led the Warriors in goals scored. (Melissa Glover Photo)

Six for the boys…

Suffolk had its fair share of representatives on the Southeastern District teams. Both King’s Fork High School and Lakeland High School made their ways to the postseason, with Lakeland advancing to the regional semifinal before being defeated.

Nansemond River High School led the way with three selections with all of them on the second team. Seva Karlov, Taylor Jones and Christian Melton all made all-district. Both Karlov and Melton were seniors this season. Karlov led the team with 10 goals. Jones, only a freshman, was second on the team in goals with eight.

“It feels amazing to have achieved the All-District team,” Jones said. “I put a lot of work in off the field, so it’s cool to see it pay off a bit. I definitely couldn’t have achieved this without those other 22 guys and my coaches, Coach Tordoff and Coach Leverone. All my teammates worked hard this season.”

Even though Nansemond River didn’t make the playoffs, there were able to have some successful individual seasons. The Warriors played in a tough region and was coming off a season where they finished as one of the top four teams in the state last season. Karlov and Melton wanted to build on what they had been a part of the year before, but injuries and other things weren’t on the Warriors side. Jones returns next year and is excited for what’s to come.

“I wanted just to go out there and be a good teammate and win as many games as possible,” Jones said. “I am excited about the future.”

King’s Fork had the second most selections with two, both coming on the second team. Caleb Harris and Jean-Mathias Bile’ were selected. Bile’ was selected as a defender and helped lead a good defensive attack for the Bulldogs. Harris was effective at midfield for the Bulldogs. The Bulldogs made the Class 4 Region A playoffs and took a 2-0 loss. The region is talented, and the Bulldogs’ team chemistry and willingness to work with each other helped them clinch a playoff spot.

Ryan Wright was the only selection for the Cavs as he made the second team. Wright was a standout for Lakeland this year. Wright scored two goals for Lakeland in the only playoff win for a Suffolk Public Schools soccer team. He was an integral part of a team that had one of its more successful seasons in the past couple of years.

A half-dozen for the girls

Six Suffolk girls’ soccer players were selected to the All-District teams for their play this season. Both King’s Fork High... read more