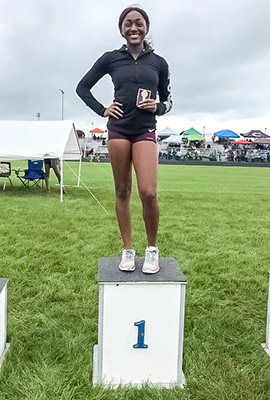 Kaia Young was voted Suffolk News-Herald Player of the Week after winning a state title in the 300-hurdles for King's Fork High School. (Submitted Photo)

Kaia Young was voted Suffolk News-Herald Player of the Week after winning a state title in the 300 hurdles for King’s Fork High School.

“I feel like this has been my best season yet,” she said. “I really got the opportunity to focus in on myself as an athlete. Last summer, I took it upon myself to learn how to run hurdles with the Western Branch track club, and that extra training really helped me a lot this season.”

Young won her state title through resiliency. Rain shifted all types of plans and pre-meet focus she might have had leading up into that weekend. King’s Fork was forced to travel back and forth to Harrisonburg with barely any rest to complete the meet. Young could have easily been thrown off and gave up, but she didn’t. Before the meet, Young came in at No. 2 in the event and told herself if she wanted to finish first, she was going to have to push through any obstacle.

“Winning a state title is something I always wanted,” she said. “For it to have finally happened in my last race makes it that much better.”

In previous seasons, Young made the state meet for a relay. This year, she wanted to add some individual races to her state meet. She made it in the 300-meter hurdles and the 200-meter dash. She actually won the only state title for King’s Fork in either outdoor or indoor season this year.

Her coach was also impressed with what she was able to accomplish.

“It is very rewarding, because this season I put in a lot of time and effort to better myself as an athlete and to hopefully come out as a champion and that’s what I did.”

“That was by far the most gratifying event of the season for us,” Coach Shawn Warren said. “Kaia worked tremendously hard this season and put in a lot of extra work after practice to get her hurdle work in. The conditions were less favorable because of the rain, but she was able to block all that out, focus and run a clean race and ended up with the state title.”

Hearing the cheering of her family, teammates and coaches motivates her. Her oldest brother won a state title in 2011 and inspired her to achieve the same thing. The saying “Pain is only temporary” motivates her and helps her get through practice and meet.

“When you get on the track just give it your all, because it’s only going to hurt for a little,” Young said.

To prepare for a race, Young isolates herself to get mentally focused. She builds her confidence by telling herself “you got this,” and she just runs her race. Her favorite athlete is Allyson Felix, an Olympic gold medal track athlete.

Madison Froemel was selected All-State for the second consecutive year in a row. The King’s Fork High School standout has... read more