A local art instructor with decades spent on a potter’s wheel recently had her work displayed at an international show where size matters.

Harriette Laskin, 75, has been teaching pottery classes at the Suffolk Center for Cultural Arts since 2006 and has more than 45 years of pottery experience, including 34 years teaching at Tidewater Community College. Two of her pieces were accepted for the 2018 International Cone Box Show held in March.

The Cone Box Show is a juried exhibition of miniature ceramics held every other year at the National Council on Education for the Ceramic Arts. It’s the world’s largest ceramic arts exhibition, drawing thousands of people for handcrafted wonders that marvel with their details.

Submissions can be no larger than 3 inches by 3 inches by 6 inches, the size of a standard or large Orton cone box. Only 70 of the 250 submitted pieces were accepted, according to the press release, and both of Laskin’s submissions made the cut. 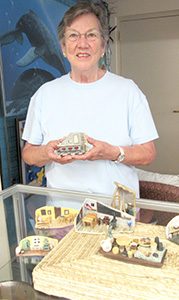 “I was really floored,” she said in a phone interview. “I heard that they had accepted one of my pieces, but I didn’t think they accepted the other one as well.”

Laskin recalled when she was a little girl playing in the mud with her friends under one of the big billboards in Norfolk. She became more and more fascinated over the years by the creativity of sculpting clay and experimenting with different colors and glazes.

“I like taking this mass and forming something from it,” she said.

She drew on her lifetime of experiences for her show submissions. Her “Soda Shop” piece is a recreation of her first job working the soda fountain at a Norfolk drug store in the 1960s.

For her, the details mattered most. Red countertop stools with black-and-white floor tiles and a milkshake mixer on the countertop. Mustard and ketchup bottles with a napkin dispenser. She also took the liberty of adding a jukebox to her ‘60s lunch spot.

“There wasn’t one in the drug store I worked in, but I had a lot of fun making that jukebox,” she said.

“Potter’s Studio,” her other accepted piece, was taken straight from her studio today. It includes a potter’s wheel, boxes of clay, rolling pins and open windows for fresh air.

“It’s everything a potter would need and all the other things you would find in his or her workspace,” she said.

This ceramic artisan has also had a long-time passion for teaching her craft, whether it’s pinch pots with kids or clay whistles with high-pitched chirps with older novices. She said she prefers teaching students that have no experience at a potter’s wheel.

“It’s much better if they don’t know how to do a lot of stuff, because then they’re much more receptive to new ideas,” she said.

City buildings were opened as cooling shelters during business hours Monday as the heat index rose in Suffolk. The National... read more