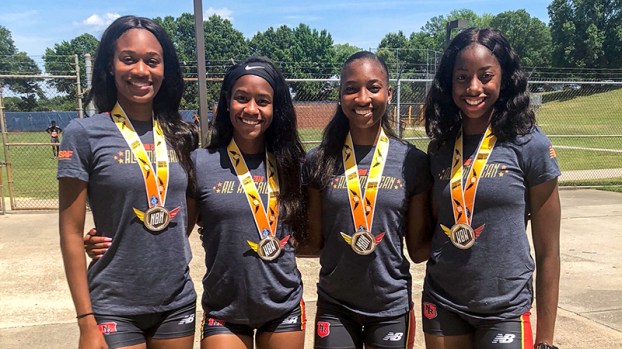 Asia Crocker, Brene Donaldson, Tre’Breh Scott-McKoy and Kori Carter ran four relays and won two national titles at the New Balance Nationals last weekend. All four runners were All-Americans in all four events that they ran together. They won national titles in the 4x200 and Swedish relay. (submitted photo)

Nansemond River High School’s track and field team went to North Carolina to compete in the New Balance Outdoor Nationals over the weekend. As usual, WAR was able to come home with some standout performances.

They took the national title in the 4×200 relay. Tre’Breh Scott-McKoy, Brene Donaldson, Asia Crocker and Kori Carter were all a part of the award-winning relay with a time of 1:36:30.

With such a small group, WAR was able to come away with four national titles and became All-Americans in each event. Carter also competed in the 100-meter hurdles and finished fourth, earning an All-American finish in that event.

“All the hard work competing and training this year really paid off for us,” Donaldson said.

With only four girls running in multiple events and no alternates, everything wasn’t easy. There were some adverse moments such as injuries and even sickness, but the girls were able to fight through for an incredible effort in the four events that they competed in.

“They did everything you could ask of them,” NRHS coach Justin Byron said. “It was incredible what they were able to do winning two titles and getting two runner-ups. There were a lot of things going on behind the scenes that made everything that much more exciting. I am proud of those girls. That’s what we train for.”

The NRHS track program works hard all year long so that they enjoy moments like state championships and national titles.

“For what those four girls were able to do was just so impressive,” Byron said. “I tell them all the time you do it for yourself, all the hard work you put in is for you, not for me or anyone else. I’m glad they put it together, and it’s something the community should be proud of.”

“We all worked so hard for it,” Carter said. “It is an awesome feeling.”

Crocker, a senior, was able to finish up her senior season with her first national title. The journey was that much sweeter to her.

“It was honestly the best feeling in the world, because I knew I had left everything out on the track with no regret,” Crocker said. “Our possibilities are endless, and we all trust our training enough just to leave it all on the track. We are always prepared for whatever obstacle comes our way.”

Everyone but Crocker who competed at nationals will be returning next season. Byron is excited for the future and for others who will be stepping up next season.

“We have so much experience coming back with the other three girls with state title and national experience between them,” Byron said. “This was somewhat of a rebuilding year for us, and I’m thankful for what my seniors have done and what we have for the future.”