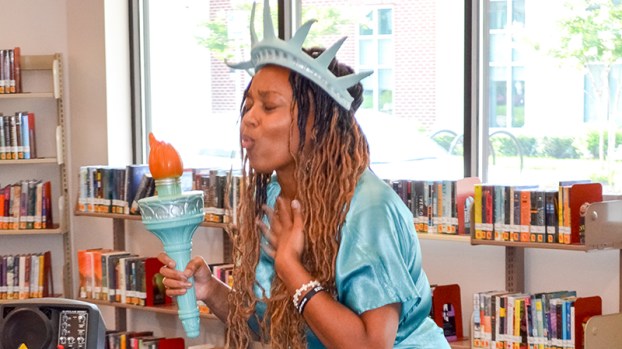 Gloria Williams, 33, stood in front of more than 60 people gathered at Morgan Memorial Library Tuesday evening. She was dressed like the Statue of Liberty, complete with her crown, a torch in one hand and a book in the other as she recited the national anthem.

But this local artist faltered after just a few lines. She dropped her book with a thud and went into her performance.

This was her original skit poem she called “The True Anthem,” a young black girl’s realization through her ancestors. She realized that the Statue of Liberty was a symbol of freedom designated as a national monument nearly 100 years ago and black people are still fighting for a better tomorrow.

Her character finally understood that the national anthem was written in 1814, two years after the War of 1812. Two years after black men gave their lives in battle even before they were considered human beings, Williams said.

“We risked our families, our lives to make it to the rocket’s red glare,” she said loudly and in-character in front of a hushed audience, “and the flag stands tall, but we still ain’t free. The bombs bursting in air didn’t heal our wounded backs or put a cease to our deprivation. We’s still ain’t free.”

That dramatic rendition was one of several at the Suffolk Public Library’s Juneteenth Jamboree. Staff organized a series of speakers, from local citizens to members of organizations like Urban League Hampton Roads Inc. and the Hampton Roads Black Professionals Network.

Mason’s Grill and Smokehouse, Rodman’s Bar-B-Que, Kroger and Harris Teeter helped cater the free event that needed more and more chairs brought to the lobby as seating quickly filled up.

“Every person that responded to me said, ‘Hey, I have this person that also wants to be involved,’” said library employee Amy Brunson. “It was a very organic, community-driven effort.”

The speakers took turns with the microphone to share their thoughts on Juneteenth. Williams also performed a medley of songs that demonstrated black excellence and read “Caged Bird” by American poet and civil rights activist Maya Angelou.

“It helps depict the idea that although you might be recognized, it takes a while before that becomes realized,” she said.

Nathan Richardson, an accomplished poet and published author who also holds presentations as Frederick Douglass, recited Lincoln’s proclamation to the crowd at Morgan Memorial. He explained how Juneteenth signifies the proclamation’s announcement in Galveston, Texas on June 19, 1865, roughly two and a half years after it was first read in Washington, D.C.

It was carried by the speed of horseback and telegram against pushback from former Confederate states that didn’t want their slaves to realize they were free.

“The slaves that were in Galveston were still captive and did not know that they were free,” Richardson explained. “It’s like being in World War II, still fighting when you do not know that the war is over.”

For some, it was their first time hearing the Emancipation Proclamation read aloud in its entirety. Richardson and others quizzed the audience on what they learned Tuesday evening, from the proclamation to the amendments that gave blacks the right to vote and become citizens.

“If possible, take yourself, go to Washington, D.C., and look at the original document,” Richardson said. “It would be like going to see the original copy of the King James Bible. It deepens your faith.”

The evening was especially important for the black boys and girls that were given another opportunity to share their voices.

Andre St. George, founder of the SGS Foundation, echoed that sentiment as a father.

The father of three made it clear that black people are still in the fight, 152 years as of Tuesday after they were freed from bondage. He said that Juneteenth wasn’t just an American holiday, that it’s meant for black people worldwide to know their history and to keep pushing forward for a better future for themselves, their children and their children’s children.

“After this day is over, and it’s June 20, will all this go in vain?” he asked everyone in attendance. “Or are we still fighting for what we call freedom? I want you to ask yourself, what does freedom look like to you, and are we free?”

City buildings were opened as cooling shelters during business hours Monday as the heat index rose in Suffolk. The National... read more