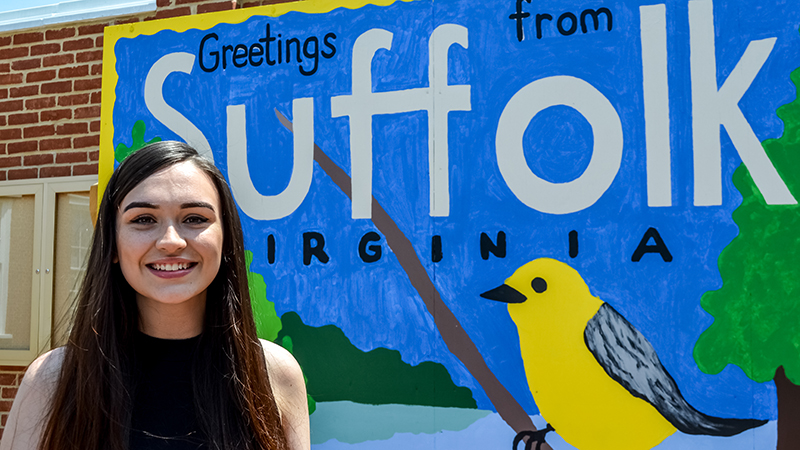 Savannah Miller, the 2017 valedictorian of Nansemond River High School and a rising sophomore at Dartmouth College, beside the mural on display at the Suffolk Visitor Center on North Main Street. Miller is one of the two winners in the 2018 Eleanor Frost Playwriting Contest held at Dartmouth.

Miller was actually at the campus gym with a friend when she first read the congratulatory email on her phone. Heads turned as she screamed with glee, including her friend’s. She said they ended up leaving the gym to get ice cream instead.

“It just wasn’t something I expected. It was something that I wanted to write for so long, then I decided to submit it and see what happens,” she said. “But I’m really happy I got recognized.”

The three will be featured in the Frost and Dodd Playwriting Festival that will be held at Dartmouth July 27 to 29, with Miller’s piece produced and directed as a reading, along with the other Eleanor Frost winner “Sigh No More.”

“The House,” set in the 1980s, is the story of two brothers reconnecting during the sale of their childhood home in Florida. One brother remained close to his heritage while the other left his family’s traditions and past behind for a new life in California’s Silicon Valley.

Miller said wanted she long wanted to write about the sale of a childhood home to dive into how people are defined by where they come from. But her writing really came together when she infused a family love story.

She said she was heavily influenced by her late great-grandparents, Lydia and Tom, from her father, Daniel Miller’s, side of the family. Miller had the chance to meet her great grandparents before they passed, Lydia in 2008 and Tom in 2011.

When she once found Tom holding a cheap, black composition book, he was writing the story of how they met.

“I decided then and there that at some point, I was going to write about their love story, too,” she said.

They met when Tom was in the U.S. Army stationed in Puerto Rico during World War II, and after the war was over, Lydia came home him.

“A major theme in this is that my great-grandmother was Puerto Rican,” Miller said. “She thought she was coming into this ‘American dream’-type of world, but it wasn’t as ideal as she thought it would be.”

She had talked to family about being Puerto Rican in the United States, and that heavily informed her California-bound character that was diving into a primarily white industry in the ‘80s.

“Part of me writing this play was learning where I come from, in a way,” she said. “To explore this part of me I hadn’t had the chance to explore in this way.”

When she wasn’t working as a Dartmouth College tour guide or writing about the arts for her college newspaper, Miller was busy in theater throughout her freshman year in one capacity or another.

For her first three terms at the school, she was either acting or working as a stage manager or helping with wardrobe. She put on different hats for a graduating student’s ensemble piece called “The House with Ramps,” one of which was doing voiceovers for scenes.

“We didn’t have a massive set ,so I did voiceovers to contextualize it,” she said.

Her director on “1984” — adapted for the stage from the 1949 radio play — sent the students numerous articles about current events and issues for the benefit of their production.

“He really wanted to play with this parallel between what George Orwell wrote and what’s going on today, both at home and abroad,” she said.

This theater lover was born into the life through her mother Dr. Joleen Neighbours, NRHS theater director and Suffolk Public Schools fine arts facilitator. Miller participated in a dozen productions as part of the NRHS performing arts company, five of which were for competitions.

“I feel like Nansemond River is really what gave me this foundation in terms of my acting and writing abilities,” she said. “It was the first place where I was able to write something and have it produced. It was where I first caught my stage writing bug. Without that, I don’t know if I would have been inspired to write this play.”

“The House” will be produced July 28-29 at Dartmouth College’s Bentley Theater. Miller will also prepare for a study-abroad program in Russia this summer, where she will have the chance to catch a World Cup match.