A 2002 Nansemond River High School graduate and Suffolk native is serving in the U.S. Navy at Commander, Naval Surface Force Atlantic, which is located on the largest Navy base in the world, Naval Station Norfolk.

A Navy engineering duty officer is normally responsible for maintenance and modernization of ships.

“I like overseeing the maintenance to make sure the ships are ready to go to sea and for warfighting,” said South. “Also, working with all the different entities involved.” 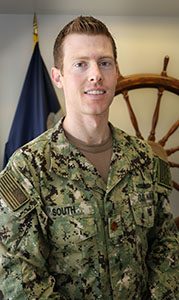 South credits his success in the Navy to many of the lessons learned in his hometown of Suffolk.

“Growing up in a community with a lot of military and folks who worked in shipyards has helped in my career,” said South.

Naval Surface Force Atlantic was established in 1975 to provide a central, East Coast command for the cruisers, destroyers, amphibious ships and other surface forces of the Navy’s Atlantic Fleet.

Commander, Naval Surface Force Atlantic is one of the six U.S. naval type commands. It was established in 1975 as a consolidation of the cruiser-destroyer, amphibious and service forces of the U.S. Atlantic Fleet. In addition to Naval Surface Force Atlantic’s nearly 70 ships, there are special mission and fleet support units that make up the more than 100 commands of the force. Naval Surface Force Atlantic personnel are stationed stateside and forward deployed in Bahrain; Rota, Spain; and the Aegis Ashore Missile Defense System in Romania and Poland. Additionally, surface forces provide a critical element to drug interdiction operations in the Caribbean Sea and Eastern Pacific.

“To go in harm’s way” in defense of the principles of freedom and democracy has been the rally call of surface force sailors for more than 200 years.

“My top priority is readiness. I’m extremely proud of the diverse group of sailors and civilians who serve at our command. They accept every challenge and serve with honor,” said Rear Adm. Jesse A. Wilson Jr., commander, Surface Forces Atlantic. “Together we are a team of warfighters who properly man, tactically train and effectively equip a force that is ready for the fight today and tomorrow.”

Though there are many ways for a sailor to earn distinction in their command, community and career, South is most proud of leading a maintenance team for ships deployed to the Fifth Fleet area.

“We created a new process for how diving work gets done on the ships,” said South. “It had a direct impact on real world operations.”

While serving in the Navy may present many challenges, South has found reward in service.

“Everyone, from senior to junior, has a part, whether it’s large or small, that contributes to the impact of the mission,” South said. “Everybody’s input, background and opinion matters.”

Gloria Williams, 33, stood in front of more than 60 people gathered at Morgan Memorial Library Tuesday evening. She was... read more