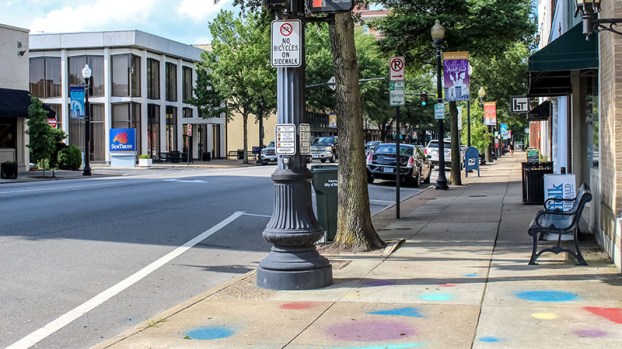 A portion of North Main Street shows some streetscape features, like narrow sidewalks, that would be improved under the approved downtown master plan.

The city hired Benchmark Planning to assist in putting together the plan, which included plans for a new library square, a festival square and new mixed-use residential area.

Dan Douglas, the project manager at Benchmark, gave an abbreviated presentation to the City Council prior to Wednesday’s public hearing. No one spoke during the public hearing.

Immediately following the presentation, the council members made motions to adopt the resolution.

“I think we are heading in the right direction, and I think it is important that we are already in year one, and we need to come up with how we are going to manage it and move forward in a quick and expedient way,” Councilman Tim Johnson said.

Other council members echoed Johnson’s sentiment with their own excitement about revitalizing the downtown area.

“I think this plan has legs to it, and it is headed in the right direction,” said Councilman Donald Goldberg.

“The downtown could come more alive in the future than it is today,” said Councilman Roger Fawcett. “We should move forward in whatever pace we can to make improvements.”

Benchmark Planning focused its efforts on the 160 acres of the downtown area, and they did so with input from city officials and the public as well as their own research and analysis.

The proposed library square would encompass where Morgan Memorial Library currently sits across from City Hall. The plans and renderings included a multi-building structure, with the main library anchored in the center.

Douglas presented plans that laid out three options for the focus of the rest of the site — a focus on education, a focus on small business and a focus on living. All of these would leverage additional development and partnerships surrounding the area.

East Washington Street was a focal point for the mixed-use residential and historic rehab in the master plan.

Proposed is a public-private partnership to spark redevelopment in the area and roughly 142 residential units located across from the Health and Human Services building.

“I am happy to see that it covers the whole downtown and crosses over the railroad tracks on Washington Street,” said Vice Mayor Leroy Bennett. “It’s a great move to have the whole downtown involved. I like the plan, and we have something that we can look forward to.”

The parking lot behind the courthouse would be the location of the proposed festival and market square. This would provide a space for festivals, live music, holiday events and markets in the downtown area.

The plan showed the possibility of street vendors and an outdoor dining area or beer garden on the promenade.

“I think there are things we could try now for minimal cost and get people downtown. For me I would say the event venue,” said Mayor Linda Johnson. “Once we get them spending money and having fun, then I think you’ve started down the right road.”

While Mayor Johnson was most excited about the new event venue, Councilman Mike Duman was more in favor of updating the streetscape on Main Street.

Beautifying the streetscape on North Main Street was also proposed to encourage new retail and restaurants as well as foot traffic.

Major improvements would include managing the paving and landscaping not only to prevent injury but also to make the space look beautiful. Doing so would encourage more foot traffic in the area and the possibility of outdoor dining.

To make outdoor dining possible, the plan suggested narrowing North Main Street to give an additional four feet to the sidewalks. This would make each lane 11 feet wide, while the parking lanes would shrink by only 3 inches.

“It’s a rather ambitious plan based on dollars and cents, and as we all know it is based on the availability of funds. I think it’s most important to implement the plan and have a prioritization of the process,” Duman said. “The streetscape is very important and could be the first thing we do. Individuals can see what is happening, and I think in the big scheme it is less expensive than the other initiatives.”

The city is working on getting a downtown management entity to help guide the process as it happens and make small improvements to the downtown area.

“I’m not getting any younger, and I’d like to see something happen quickly,” Mayor Johnson said.