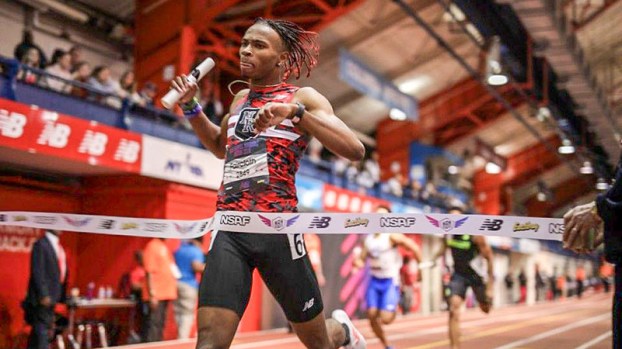 Daiqwaun Faircloth was selected the Gatorade Virginia Boys’ Track and Field Player of the Year.

The Nansemond River High School track standout has made history. This week, he became the first boys’ track and field athlete from Nansemond River to be selected Virginia Gatorade Player of the Year. The recent Nansemond River graduate enjoyed a breakout senior season where he won two state titles and two national titles as well.

In the indoor season, he helped Team WAR win the 4×200 relay, and he helped win a mixed relay title for WAR as well. In the outdoor season, he won two state titles in the 100-meter hurdles and the 300-meter hurdles. His time of 13.78 in the 110 hurdles was No. 3 in the nation at the time that he ran it. He was also one of the state’s top academic candidates when it came to the criteria for the award.

“This feels great,” Faircloth said. “I did so many things to make me and my family proud. I set school records, and I was on two national winning teams. I am blessed with the way my senior season ended.”

The Gatorade Company had this to say about Faircloth in its press release:

“The award, which recognizes not only outstanding athletic excellence but also high standards of academic achievement and exemplary character demonstrated on and off the track, distinguishes Faircloth as Virginia’s best high school boys’ track and field athlete.”

The WAR standout’s progression over the last two years has been remarkable and has been something that has impressed his coaches every step of the way.

“The summer after a disappointing sophomore season, Daiqwaun told me that he wanted to hurdle,” Nansemond River coach Justin Byron said. “I told him hurdling was hard work, and I wasn’t sure if he was ready for it. That summer, he went out and developed his athleticism and put in work on his own to prove that he was serious about track.

“That work ethic not only improved himself but also became an example and a positive impact on the boys’ program. His commitment and leadership put the boys’ program back on the map as well as earned him national championships, state championships and Gatorade Player of the year honors. It was great to see his development and awesome to watch his progress. He definitely earned this award.”