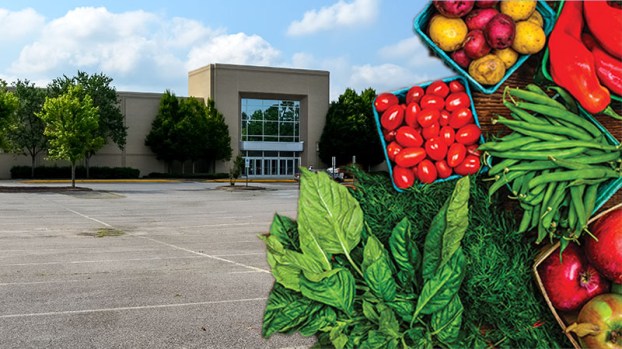 The Western Branch Farmers Market will have space available for local and regional vendors and community nonprofits every Sunday, along with special events, holiday promotions, live music and other entertainment.

Virginia Beach-based Kotarides Holdings bought the mall earlier this year for $12.9 million hoping to bring shoppers back to the struggling mall, which has lost multiple stores since 2015.

According to Alanna Deal, director of marketing for Kotarides, this market is the result of an overwhelming response from the community through surveys, local meetings and social media. She explained that the wealth of open space in the mall’s parking lots made the prospect all the more exciting.

“We’ve been doing feasibility studies of what we can do with the mall, and this was the first thing we could immediately start to bring back some life in that area and get people excited,” Deal said in a phone interview.

Jill Doczi, former owner of the popular Shore Drive Farm Market in Virginia Beach for about three years, has been working with Kotarides and the city for this project. The market is zoned for up to 32 vendors, she said.

“The ultimate end goal of this market isn’t to make a profit,” Doczi said in phone interview. “It’s to support local and regional agriculture, along with the Western Branch community.”

A recently approved ordinance allowed for privately owned and operated farmers’ markets throughout Chesapeake. Those involved with the new market hope it will see better support than some previous ones in other locations.

There are two farmers’ markets run by the city, one at Chesapeake City Park and the other at Battlefield Park South. They operate from June 9 to Sept. 29 on Wednesdays and Saturdays, according to cityofchesapeake.net.

The city intermittently operated a market at the Western Branch Community Center, the latest stint lasting three years. But there wasn’t enough business at the community center to sustain the market, according to Watson Lawrence, unit coordinator and agriculture extension agent for the City of Chesapeake.

He said that there were only two vendors committed to returning this summer, and the market was discontinued.

“I got a lot of emails and phone calls from people, but people didn’t support the market with their feet,” Lawrence said. “(The farmers) have to have business come to them, and if they don’t they will start looking for other opportunities.”

Cory Hoar, owner of Feel Good Farms in Moyock, N.C., was one of the Western Branch Community Center vendors in the past three years. He will be at Chesapeake Square Mall with tomatoes, corn, peaches, peppers, eggplant, green beans and much more of his produce.

He said in a phone interview that the advertising and response for this market gave him confidence. A survey was posted in April on the Destination Western Branch Facebook page that received more than 800 responses. The day and time of the market was distilled both from these responses and from conversations with local farmers.

“I’ve got a positive outlook on it, but that’s just how I am,” he said. “We’re going to go and see how it does. “If we’ve got to regroup, we’ll regroup, but we’re excited about it.”

Doczi explained that this market could continue year-round if business remains strong, which she plans to drive through Facebook and the Western Branch Farmers Market webpage.

“These are all tactics and marketing possibilities that I’ve used in the past and they’ve worked very well, but in the end, it comes down to whether or not the community will do its best to support it,” she said.

The Western Branch Farmers Market will be held at Chesapeake Square Mall from noon to 4 p.m. on Sundays starting July 1. Visit wbfarmmarket.com or facebook.com/WesternBranchFM for more information.