Over the last few years, the Nansemond River High School track and field program has been dominant. Some of those very same student-athletes have gone on to do good things in college as well. Rashid, in her junior season at the University of Miami, finished a strong campaign. 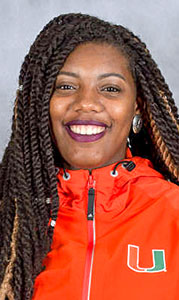 During the indoor season, she had top 12 finishes in multiple events in the discus and shot put. In the outdoor season, she continued to improve and helped her team win the ACC championship. Despite ups and downs, she felt like her junior season went well.

“I feel like it went well all the way up until the regional meet in the outdoor season,” Rashid. “I was consistent in the discus and shot put. I saw what I could improve on, and I am looking forward to it.”

Rashid had some goals this season that she was able to achieve. She wanted to have personal records in every event that she competed in this season, and she did. In the weight throw event during the indoor season at the Tiger Paw Invitational, she threw a personal best 19.28. Her coach called it the best performance of Rashid’s career. She also wanted to score points at the ACC Championships which she did helping her team win championship. It is her third conference championship with the team.

“Last year in outdoors, I didn’t make it to the finals at the ACC championships,” she said. “I set a goal to do that this year, and I did it. This one was definitely special, because we worked so hard for it.”

The Lady Hurricane placed fourth in the discus in Miami’s championship run. She wanted to place in the top three but was OK with her fourth-place finish, because she learned some things about herself. Rashid also told herself that it is OK to have bad days at times, as long as she goes back to analyze and learn something from it.

“Whether it be your performance or attitude, there is always something to learn from,” she said.

Rashid has two years left of Miami track and field after redshirting; however, she is excited about her next season. This year, she wanted to go compete at nationals but barely missed out. Nationals will be a driving force for her motivation for next season.