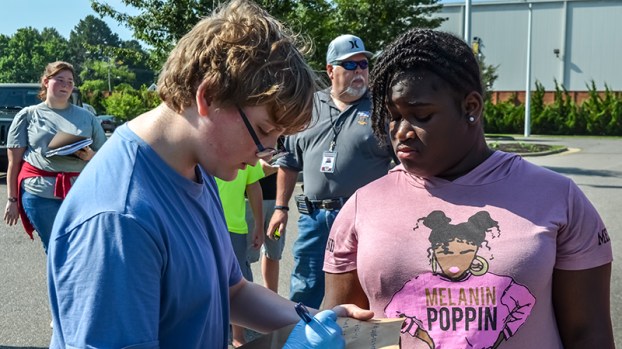 Anthony Antonucci, 13, labels an evidence bag with Dayeonna Grady, 13, at the mock crime scene in the parking lot of the Health and Human Services building on Thursday for the Suffolk Commonwealth’s Attorney’s Office’s seventh annual Forensics Camp.

Trial and error at forensics camp

The young investigators found the stolen gray Nissan Armada in the parking lot of the Health and Human Services building Thursday morning. The car keys were missing, and the scene was strewn with evidence left by the thief. They found an empty soda can, an abandoned jacket, cigarette butts and blood on the license plate.

The teens debated whether the mock blood was ketchup or Chick-fil-A sauce as they filled and labeled evidence bags and took detailed notes of the crime scene.

“This shows them all the steps they need to go through in order to see a case to a successful conclusion,” said J.J. Marx, a Suffolk Commonwealth’s Attorney’s Office investigator with more than 40 years of local law enforcement experience.

The office’s seventh annual Forensics Camp had 66 teens ages 12 to 15 sign up for a week of speakers and activities that prepared them for Thursday’s hands-on crime scenes free of charge. Suffolk Commonwealth’s Attorney C. Phillips Ferguson presented certificates on Friday in the graduating ceremony for the camp’s largest year yet, according to Community Outreach Coordinator Joan Turner. 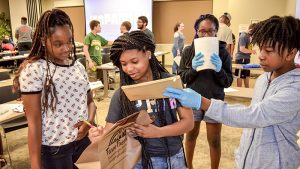 Kayla Baker, 13, Lenise Bazemore, 13, and Mazak Edmonds, 13, process the evidence in one of the mock crime scenes in the Health and Human Services building on Thursday for the Suffolk Commonwealth’s Attorney’s Office’s seventh annual Forensics Camp.

Turner said the kids wanted to dive into the mock crime scenes on day one, but first they had to learn protocol.

“You have to understand what to do when you approach the scene,” she said, with an emphasis on the collection and preservation of evidence.

Students huddled beside the gray Nissan to compare notes as other teams inside the Health and Human Services building did the same at evidence-filled crime scenes throughout their classroom.

“You can learn how to find different evidence to lead up to the criminal who did the crime, and how everything pretty much leads up to itself,” said Christopher White, 12. “It shows how you can’t really hide from what you did.”

Suffolk’s sheriff’s deputies have partnered with the Commonwealth’s Attorney’s office each year to explain evidence collection, processing and court testimony.

Charlotte Flores of Hampton enrolled her daughters Jayla and Charlly and was the program’s unofficial mama bear for the week. She attended every session and was impressed by how fun and informative the program was, both for her kids and for herself.

“I actually learned a lot, too,” Flores said with a smile.

Several of the kids agreed that the most fun they had was in the mock trial of Goldilocks for breaking and entering. They sought justice for the Three Bears but instead saw the prosecution’s case unravel at the seams.

“It was a mistrial,” according to Matthew Moegenberg, 13. Apparently the prosecution broke protocol during the proceeding and surrendered their case in the process. “I kind of messed up,” Matthew added.

“The defense attorney shut down the whole case in one sentence,” said Jack Drake, 15. “Everybody just starting screaming and clapping really loud.”

Aside from the fun and games, the camp showed the teens the realities of law enforcement, as opposed to the simple fixes seen before each commercial break on cable. Marx explained that law enforcement is a difficult profession that demands dedication. One mistake and a case can fall apart, just like Goldilocks and the Three Bears.