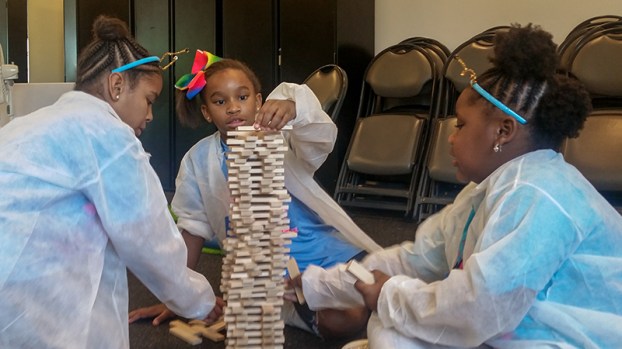 Kristen Heard, Apifani Howell and Khloe Noel work on their engineering and teamwork skills by building a tower at STEM Girls Shine at the East Suffolk Recreation Center on Saturday morning.

The girls, dressed in white lab coats, made their scientific discoveries with the guidance of several adult leaders as well as young women earning high school volunteer hours.

“The whole idea is just to get them engaged,” said Yvonda Kolo, the founder of STEM Girls Shine. “We’re looking to grow it, and we’re looking to come back every year.”

The girls learned about the importance of bees as pollinators, crafted bee headbands as a fun craft and made their own seed bombs to plant bee-friendly foliage. They made the ever-popular slime, choosing their colors, scents and glitter, and learned about chemistry along the way. They performed coding tasks with circuit kits and a Sphero, an app-enabled robotic ball that allowed them to control the ball from a phone or program it to perform certain tasks on its own. There were also LEGOs and other building toys for them to practice engineering skills and teamwork.

“I connected everything to a career,” Kolo said. “So we’re doing this for fun, but this is also part of what STEM professionals do.”

Krishelle Eason, 8, a rising third-grader at Elephant’s Fork Elementary School, said they learned about how their bodies work.

“We talked about our brain, our heart, our lungs and other stuff,” she said. She couldn’t choose between making slime and learning about bees as her favorite part of the day.

“They dance and they communicate by smell and antennae,” she said, adding that the dance is called the “waggle dance.”

Kolo’s own daughter, 9-year-old Naomi Kolo, said she got to help her mom prepare for the event by making several batches of slime to find the right quantity of ingredients to use.

“I learned in slime when you add too much, it will get stringy and you can’t really fix it,” Naomi said. “You just have to make it over again.”

Yvonda Kolo said the group plans to bring the event back next year. Participation increased slightly this year from the first year, and they hope even more girls will be able to come next year.

Each girl received a goodie bag that included a LEGO set and a copy of “Hidden Figures” by Margot Lee Shetterly.

Art in the park on Family Fridays

The summer rain and overcast skies on Friday morning didn’t stop children from getting creative at the Family Friday program... read more