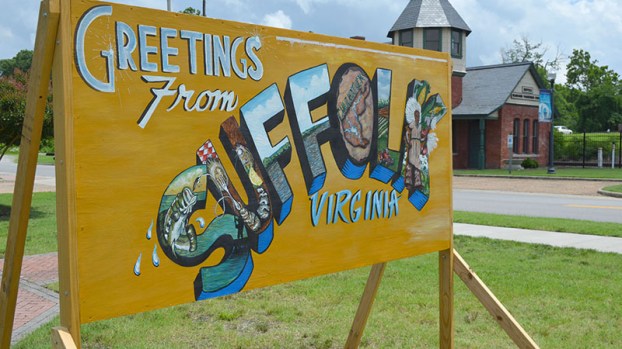 A mural celebrating Suffolk pastimes including fishing and eating is on display near the Seaboard Station Railroad Museum.

More murals on the move

Downtown Suffolk has been livened up with sizable art projects that have been seen by walkers and drivers each day since, and the community is invited to paint another vibrant piece for National Night Out this August.

Keep Suffolk Beautiful, the Suffolk Art League and the downtown art studio OnePast7 have been working together on public murals. This next mural will be finished at the King’s Fork location for National Night Out scheduled for Aug. 7, according to Suffolk Art League Executive Director Linda Bunch.

Last year’s celebration featured communities, civic groups and businesses coming together across the city to raise awareness on crime and drug prevention and to show pride in local law enforcement.

The proposed mural will be 4 feet tall, 16 feet long and have a safety and first responder theme, with the police department’s “Lock It … Don’t Lose It” campaign slogan incorporated in the sketch. Members of the public will be provided the paint, brushes and other materials needed to finish the scene.

“We did this with the one at the farmers’ market, and about 50 people helped during the day to get it done,” Bunch wrote in an email.

That 8-by-8-foot mural depicts a vibrant scene in the Great Dismal Swamp and represents the Cypress Borough. It even includes a bear painted by Suffolk Vice Mayor Leroy Bennett.

Ed Beardsley, owner of OnePast7, is also working on securing changes to city code that will allow murals on downtown buildings.

James Brooks’ lifelong dream came true on Friday when he graduated with 39 others from the State Police Training Academy... read more