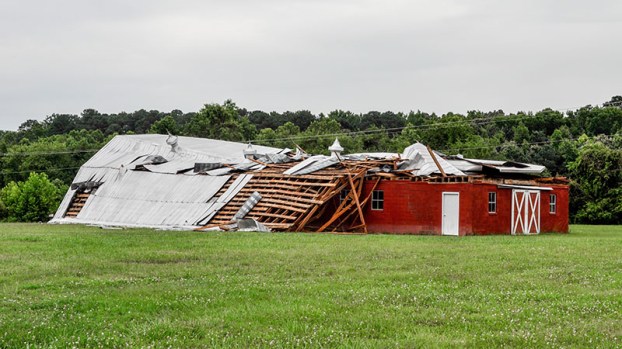 Damage from severe storms Friday night was the result of severe straight-line winds, meteorologists have determined.

Folks had speculated that some of the damage may have been the result of a tornado, and Jeff Orrock, meteorologist in charge at National Weather Service Wakefield, can see how easily people viewing the damage can be fooled.

“Wind damage like this can be very similar to tornadoes,” he said during a phone interview Monday. “It does look like high-end EF-0 tornado damage. These severe winds, they can be just as damaging as tornadoes.”

The most notable damage in the area was a large, iconic red barn on Route 10 in Isle of Wight County just north of Chuckatuck. Orrock said he personally visited the site on Saturday.

“Typically with those big roofs, somehow wind got inside the barn on the upper part,” Orrock said. “That causes the roof to want to lift. The whole roof slid backwards 40 feet or so. The wind getting inside is what popped it up.”

Orrock said the damaged barn, and the other damage in the area, was the result of a rear inflow jet, a wide swath of wind pushed downward from the storm that can cause a lot of damage when it impacts the ground.

“The storms themselves almost block the wind and forces the wind down to the ground,” Orrock said. “You have a very intense impact and have this initial smack with the ground. You get very intense damage, and it rushes out in front of the storm and knocks down everything in its path,” he said.

The same swath of wind, around 75 miles per hour and about three-quarters of a mile wide, is likely responsible for damage from south of Benns Church Road all the way to Hobson including the barn as well as downed trees in Lone Star Lakes, Orrock said. Thousands of Suffolk residents were without power Friday night as the storm rolled through.

Other straight-line wind damage has been identified in Windsor and Carrollton.

The storm developed around Falls Lake, north of Danville, and moved fairly slowly until it approached the eastern portion of the state.

“Once it got past Emporia, it just took off to the races,” Orrock said. “It was very impressive.”

Art in the park on Family Fridays

The summer rain and overcast skies on Friday morning didn’t stop children from getting creative at the Family Friday program... read more