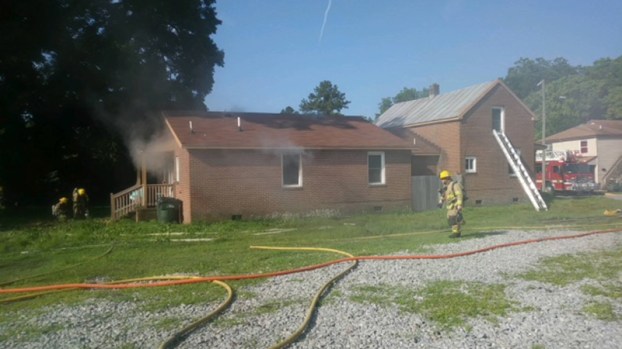 Two residential structure fires happened in Suffolk on Sunday, and the Suffolk Fire Marshal’s Office is investigating one of them as possible arson and seeking the public’s assistance.

The first fire occurred in the 400 block of St. James Avenue in a two-story duplex. The fire was reported at 8:27 a.m.

“The incident is being investigated as possible arson,” states a city press release. “There are no known suspects at this time.”

Firefighters arrived at the scene five minutes after the first report to find heavy smoke showing from the rear of one of the units. The fire damaged the bedroom and extended to the hallway, with smoke damage throughout the unit, according to the press release. The other unit also suffered some fire damage. The fire was marked under control at 9:02 a.m.

A total of seven occupants were displaced, with one adult and four children from one unit and two adults from the other.

Anyone with information on the St. James Avenue fire is asked to contact the Suffolk Fire Marshal’s Office, 514-4550, or Suffolk Crime Line at 1-888-LOCK-U-UP. Tipsters can also submit tips through the free P3 Tips mobile app, by going to www.p3tips.com or by visiting the Suffolk Police Department website at www.suffolkva.us/spd and looking for the Suffolk Crime Line link. Tipsters never have to give their names or appear in court and may be eligible for a reward of up to $1,000.

A second, unrelated fire in the 100 block of Kingsdale Road was reported at 1:47 p.m. Sunday. The first units arrived at 1:51 p.m., the press release stated.

Heavy fire was showing from the roof when firefighters arrived. There was damage to the attic and roof of the home, and the fire was marked under control at 2:22 p.m. Two adults, two children and two dogs made it out safely. No injuries were reported, but the occupants were displaced.

The Salvation Army will serve food to children this summer with a new summer feeding program. This is the first... read more