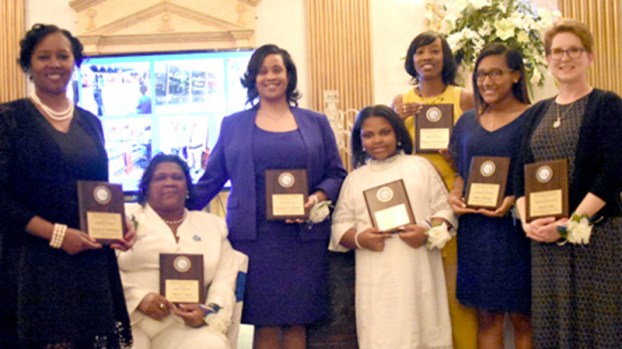 This year’s theme was “Blazing Paths with Excellence.” Seven women were honored at the event. Four awards were presented to women who are a part of the “Zeta Family” and have contributed to the betterment of the community.

Three special awards were presented to women that are not directly affiliated with the organization but are accomplishing and doing great things for the citizens of Suffolk.

The Humanitarian Award was presented to Sarah Catlett. She moved to Suffolk in July 2003 and began teaching for Suffolk Public Schools in August 2003. Catlett later transitioned to be a school counselor in October 2004. She is currently the guidance director at King’s Fork Middle School. She is a member of Main Street Methodist Church. Over the years, she has served the congregation in a variety of ways: chair of Main Street Day Care Board of Directors, Lay Worship Leader, secretary for the Board of Trustees, president of McLemore Sunday School Class, cook and server for Rose’s Supper, member of United Methodist Women, and founding member of Christian Women’s Book Club.

Regina McKinney was awarded the Trailblazer Award for her work with the Nursing Careers and Pathways Program. She founded the program in 2013. She is currently the executive director. The purpose of the program is to introduce minority students, first-generation college students and economically disadvantaged middle school students to careers in nursing and other health care fields. This free program provides a nurturing and supportive environment for middle and high school students. McKinney is currently employed with Virginia Anesthesia & Perioperative Care Specialists. She has been a mentor to RNs aspiring to become CRNAs and has provided numerous shadowing experiences for these nurses.

Lorna G. Slaughter, the Woman of the Year recipient, is a co-founder and chief operations officer for Suffolk Christian Fellowship Center. Through the Suffolk Christian Fellowship Center’s outreach, she has developed several programs that have been designed to meet the physical and spiritual needs of our neighbors. Slaughter has created partnerships with churches, organizations and businesses to enhance the economic development and personal well-being of under-resourced communities through Supplemental Source programs. She currently serves as a Family Self Sufficiency Committee member for the Suffolk Redevelopment and Housing Authority, and the Agency Advisory Board for the Foodbank of Southeastern Virginia and the Eastern Shore.

The youngest honoree, NyEma Turner, was selected as Amicette of the Year. NyEma is an honor student at Churchland Middle School. She is an avid swimmer and plays the steel drums for the Portsmouth Rising Stars. She has been a Zeta Youth Affiliate member for four years and currently serves as the Amicette Treasurer.

Mia Williams, recent Lakeland High School graduate and member of the Archonette Club, was selected as Zeta Archonette of the Year. At Lakeland, she was a member of the Student Council Association, where she has served as treasurer for the past two years. She was also a member of DECA, the Community Restoration Team and the Rho Kappa Honor Society. She graduated with honors. Mia has been an active member of the Youth Affiliates for several years. She currently holds the position of Archonette president.

Janice L. Davis was awarded the Zeta Amica of the Year, given each year to a member of the local chapter’s Amicae Auxiliary. A native of Suffolk, she worked with the Virginia Cooperative Extension for many years and served on many nutritional boards for the City of Suffolk. She also won the award in 2011 and 2015. Davis currently serves as the treasurer for the Amicae Auxiliary.

Johnetta S. Vaughan was recognized as Zeta of the Year. She has been in the field of education for 22 years. Eight of those years were spent at Lakeland High School as a mathematics teacher. The last three years of her career have also been with Suffolk Public Schools. She was previously a mathematics instructional specialist and a middle school assistant principal. She is now the mathematics supervisor for the school system. She coached several sports, including girls’ basketball, boys’ and girls’ cross country, boys’ tennis and girls’ volleyball. She served on several Virginia Department of Education committees for item analysis and alternate assessments.

Police are investigating a shooting that took place Monday afternoon. The incident in the 200 block of Cedar Street was... read more