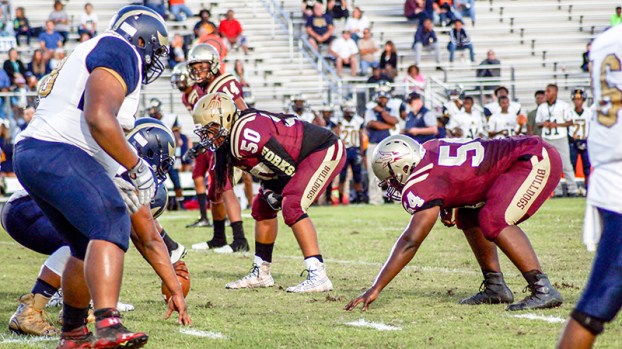 Treyshaun Mitchell and Jayree Hardy line up on the interior of the defensive line for the Bulldogs. Both players have multiple offers from NCAA Division I programs. (Caroline LaMagna photo)

The Bulldogs football team has been heavily recruited during the spring and summer.

Big things are happening for the student-athletes at the King’s Fork High School football program heading into the 2018-2019 school year. There are many players pulling in offers and others who are gaining interest as the months go by. In the spring, coach Scottie Littles has met with more than 120 schools that have come to Suffolk to either offer players or meet and inquire about players.

Rising junior and nationally ranked visited lineman Treyshaun Mitchell has been offered by six schools so far, with more coming. He has been offered by Virginia Tech, Temple, South Carolina, Old Dominion University, East Carolina University and the University of Virginia. Last season, he was an All-District selection and All-Region.

Jayree Hardy has pulled in quite a few offers as well. His offers come from schools such as Temple, Marshall University, Old Dominion, Norfolk State University, Hampton and Campbell University. Hardy doesn’t want to get caught up in all the hype but instead has just been continuing to stay focused and work hard. Hardy was All-District selection last season.

“I’ve just been trusting the process and working hard every day, just letting things fall into place,” Hardy said. “That’s one of the reasons I play football, because of this journey.”

Bobby Boone currently has offers on the table from Norfolk State, Hampton and North Carolina Central. He has met with coaches, and he feels like his hard work is starting to pay off.

Devin Chambliss currently has an offer from Alabama State University, and Jordan Chambliss has interest from Elon, Hampton and Norfolk State. Devin was an All-District selection at linebacker last season. Leo Wethington is another player whose stock continues to rise and will be a big-time recruit sooner than later.

Last season, King’s Fork welcomed its first Southeastern District title and its first No. 1 seeded regional playoff appearance. From that team last season, the Bulldogs have put 18 players in college. Littles and his staff take pride in grooming players to become model young men and the best student-athletes at the next level if they have the opportunity to do so.

“It’s a lot of hard work that goes into this, being recruited and doing things the right way,” Littles said. “I’m proud of all these kids and everything that they have done.”

“All this means everything to me,” Hardy said about his and his team’s recruiting. “I want to see all my brothers succeeding.”

“All the attention we are getting is a result of our hard work and trusting the process and our coaches,” Chambliss said. “They have coached us hard and showed us what we need to do so we can play at the next level.”

Ward to host camp at NSA