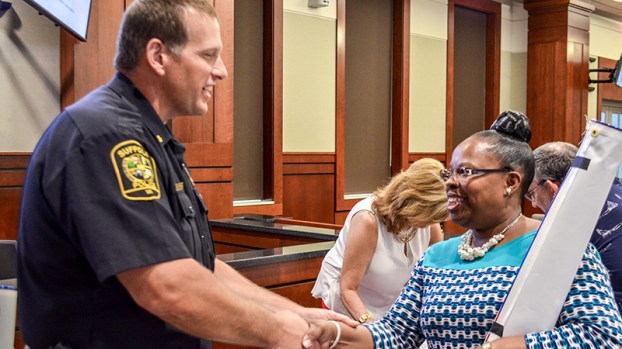 Maj. Steve Patterson shakes hands with Pastor Anita Lewis of God Is Real Ministries at the kickoff for National Night Out in the City Council Chamber Tuesday evening.

More than 40 people met in City Council chambers Tuesday evening to officially kick off the 35th National Night Out in Suffolk. These people represented local communities, churches and businesses, and each one that registered for the event got a banner to advertise the event in their neighborhood.

National Night Out is an annual event set for Aug. 7 that encourages neighbors to fight crime by getting to know one another and by building relationships with local law enforcement.

“National Night Out is all about citizens taking ownership of their communities and partnering with local law enforcement to make our neighborhoods safe,” Suffolk National Night Out Chairman Diana Klink told the crowd Tuesday evening.

Each participating community will celebrate in its unique way, from small cookouts to much bigger parties with children’s games, music and other entertainment.

“Primarily, it’s about the relationship that we build with the local police department and city officials,” said William Goodman, president of the East Suffolk Gardens Civic League, which has been involved since the city’s first National Night Out. “It also enhances our relationships with the people in the community and the community leaders.”

It was the first time many of the groups Tuesday evening registered to participate in National Night Out, like Autumn Ridge Apartments on Nancy Drive.

“I think the children in the community are going to love it,” said Chari Hatcher, property manager for Autumn Ridge Apartments, “and it will show them that they don’t have to fear police officers.”

Another first-timer will be Temple Beth El on Bridge Road. James Flippens was at the meeting on behalf of Belleville Experience or BellX, a free, public youth program for ages 2 to 18 that offers educational seminars, trips and giveaways.

Flippens agreed that it was time to foster better relationships with local police officers.

“With everything that’s going on now in the community, nobody trusts the police,” he said. “You have to build that trust back up, like how it was when I myself was a kid.”

The Project 365 theme for this year’s celebrations will once again be Suffolk Police Department’s “Lock It, Don’t Lose It” campaign, in which residents are encouraged to lock their cars and homes to help prevent the business of thieves.

“A lot of these items that get stolen end up leading to other crimes,” Maj. Steve Patterson said. “Guns get taken and used in other cities. Electronics end up getting pawned or stuff gets stolen off them. Then, your identity gets taken and the next thing you know your credit card gets run up.”

Millions will take part in National Night Out this August across thousands of communities from all 50 states, U.S. territories and military bases worldwide.

Suffolk’s 2017 National Night Out celebration was ranked second in the nation for its population category by the National Association of Town Watch, marking the 12th straight year that Suffolk finished in the top five nationally, ranking it the highest-placing city or county in Virginia in their judging categories, according to the press release.

National Night Out registration for individual communities and organizations will be available through July 22. Visit suffolknno.com for more information.

‘Up and down’ weather for farmers

David Bosselman and his son, Hunter, were underneath a John Deere sprayer at their Old Myrtle Road farm Tuesday morning... read more