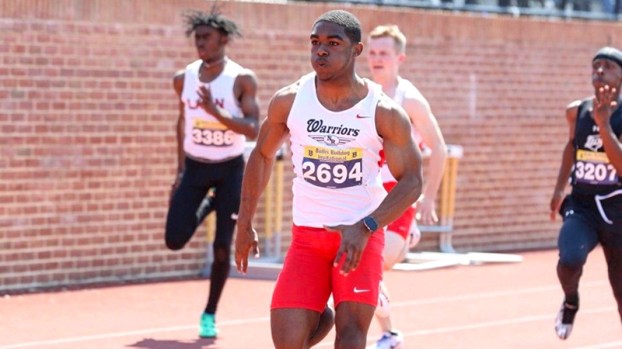 Jevon Waller sprints for the Warriors. He, along with Jacari Jennings and Daiqwaun Faircloth, will be attending Virginia Commonwealth University. (Craig Amoss Photo)

Daiqwaun Faircloth, Jevon Waller and Jacari Jennings will be headed to VCU on scholarship for the track and field program. All three seniors were standouts for the WAR track and field team and accomplished a lot in their time there.

Faircloth, who was recently named Virginia Gatorade Player of the Year, will look to make an immediate impact in the hurdles. He mentioned that his recruiting process was rough at times, but VCU was the only school that remained persistent with him going back to last summer. Going to college for track is something Faircloth has hoped for since middle school.

“I have been wanting this for a long time,” Faircloth said. “Now I am able to accomplish it. My family was happy with whatever school I picked, and they stuck with me through it all.”

The hurdler had an incredible year, as he won two state titles for NRHS in both the 110 hurdles and the 300 hurdles in the outdoor season. During the indoor season, he won a state title in the 55 hurdles. Not only was he Nansemond River’s first ever boys’ Gatorade Player of the Year, but he was also named Senior of the Year by Milesplit.

Waller has won two state titles and two national titles in his time at NRHS. He helped win a national title in the winter during his senior campaign, but due to injury couldn’t compete like he wanted to in the outdoor season.

“You want to drop all these really fast times to get coaches to look your way, but I didn’t really run my outdoor season,” Waller said. “Coach B thought it was a great opportunity for me to head to VCU, and I took it.”

After playing football since he was 4 years old, Waller stopped playing football his senior season to focus on track full-time. He was a standout running back on the team but felt like forgoing football would be better for him in the long run.

“Besides the minor injuries this year, this was the best I’ve felt in a long time,” Waller said. “The wear and tear were definitely taking an effect on me. I felt like it was best to focus on track and just my physical health as a whole.”

Waller and Faircloth were both a part of a national champion 4×200 relay team for NRHS.

Jennings, who is the school record holder in the 1,000-meter run, is excited about his opportunity at VCU. His senior season was great for him, as he dropped nine seconds on his time and made a big improvement overall. VCU is a dream school of his.

“It’s honestly a blessing being able to compete at the next level,” Jennings said. “With all the recruiting going on, I told myself I ever had a chance to run for VCU, I wouldn’t pass it up.”

Coach Justin Byron believes all three student-athletes can go there and do good things for the VCU program.