Prior to the meet, Saunders said she didn’t have any specific goals she wanted to hit; she just wanted to win. That’s exactly what she did, and in the process won her first national championship. 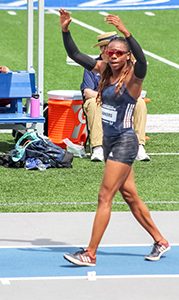 “It’s ironic I said that, because the head winds that day were massive in the competition,” she said. “Thankfully, I was able to pull off a decent jump. I felt great about my performance.”

Saunders mainly felt good about her performance because she had struggled in the past with jumping in head winds. She was able to put it past her by winning gold.

“I had conquered something I was known for struggling with,” she said. “In the past, I have messed up big competitions because of this. That winning jump was like a breakthrough for me.”

She didn’t believe that was her best jump, but it was her best fair jump. Her effort pushed through, and the win was gratifying considering how hard she has worked to get to this point. A hamstring injury set her back at the beginning of the year, and she got healthy just in time to qualify for the USATF outdoor championships.

“This win is extremely gratifying,” she said, “after putting in so many hours to get healthy before and even just working on trying to get better. I’ve gone through it, so I know how to work my way back if it happens again.”

Last year, Saunders finished third at USATF outdoors, even though she had jumped better, but her jump this year was enough for her to win. She also said the next two years are important for her in terms of making the national team.

Saunders is currently in Slovakia getting ready for another meet this week. Even back in high school, Saunders was coming out on top in the long jump. For Nansemond River, she was a state champion and then she went onto the University of Kentucky to become an NCAA Champion there in her last season in 2017. Also at Kentucky, she had multiple top-five finishes in the long jump from both the indoor and outdoor seasons.

Brown up for leadership award