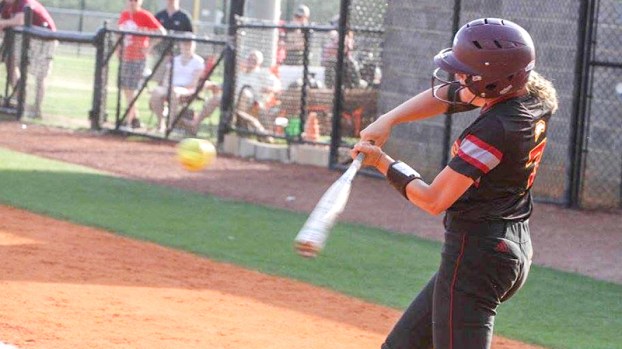 Morgan Lowers swings at the plate for Winthrop University. The Nansemond River High School standout hopes to lead her school to a Big South title in her senior season. (Winthrop media department)

Morgan Lowers finished her junior season this year learning a lot about herself on and off the field.

There were ups and downs this season for Lowers at Winthrop University. Lowers, a former Nansemond River High School standout, struggled at times through her season but learned a lot about herself in the process.

She started and played all 49 games this season while the team finished with a 17-32 record. Throughout the whole season, she collected 45 hits, 13 RBIs and 14 runs with a home run. Her batting average was .287. As a team, Winthrop went through it all — they suffered injuries, lost their coach and now have a new coach.

“It was a bittersweet year,” Lowers said. “It was my coach’s last year, so we wanted to finish strong for him. We came up a little short with injuries, but I am really excited for next season and to start with our new coach.”

Lowers accomplished a few of her goals, but one, in particular, was building her strength. She spent a lot of time in the weight room, and she felt her strength was where she wanted it to be. On the other hand, Lowers went through her worst hitting slump of her career, and it taught her a lot more than she initially thought. She was able to pull herself out and finish strong.

Off the field, more progress was made that will help her on the field and throughout life.

“After my senior year, softball will be gone,” she said. “I was just giving it a lot of thought, and at times I thought I wasn’t going to have my identity anymore. So, my junior season was much about getting my relationship right with God and making Him my No. 1 priority.”

The rising senior credited her teammates and coaches for pushing her as a teammate and as a student. The anticipation for her senior season has Lowers excited about what is to come. Her main focus is working on being a team leader, and her biggest goal is to try to win a Big South title, which could be the first in her career at Winthrop.

“I’m so excited for senior season,” she said. “Our new coach is intense but has a thrilling mindset, and I can’t wait to see how the practices will be. We also will have players coming back from injuries. I want to continue to keep my strength in the weight room. I have a feeling that my last season will be a good one.”