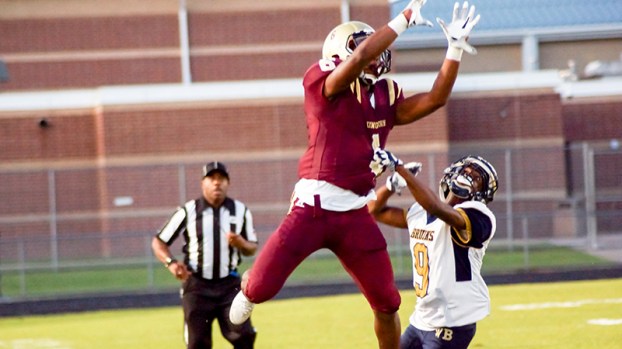 Cherrod Joe goes up to catch a pass from teammate Justin German. Both players will be attending Pierce College in California.(Caroline LaMagna)

Justin German and Cherrod Joe will be headed out west for their college journeys.

The two King’s Fork High School football standouts will both be going to junior college together in California. Both will attend Pierce College, where they will go to be student-athletes as well as compete for better opportunities. Joe and German were part of a big list of seniors that will be going to college at the next level for the Bulldogs. They totaled 18 players as a program, something of which Coach Scottie Littles and his staff are very proud.

Both Joe and German were both recruited from all kinds of programs, from NCAA Division I programs on down. However, academics were the main reason both decided to go the junior college route.

“I was getting interest from schools like Norfolk State and stuff, but my grades from early in my high school career set me back,” German said. “I wasn’t able to have the GPA most schools wanted so, going ‘JUCO’ [junior college] was the best option. It’s a good situation. I get more time to develop.”

“My academics were a factor in my decision, but my family along with Coach Littles have been very supportive through everything,” Joe said. “I had interest from multiple different schools.”

Being on the other side of the country could be a nerve-wracking task to take on, but both players are ready for it. It helps that both were teammates in high school. It also couldn’t hurt if both players were to start, and the connection from German to Joe is something that can be seen frequently on the West Coast as it was in Hampton Roads.

A lot of players in the NFL have gone through the junior college ranks and have gone on to have success. Both Joe and German are going to California with a goal in mind, and that’s to be the best student-athletes they can be while working towards a better opportunity.

German became the starting quarterback for King’s Fork as a junior and quickly ascended as one of the top playmakers in the area. Joe razzled and dazzled as a receiver for German and worked his way to setting school receiving records. Both players earned postseason honors.

Henderson makes most of his time in NY

Former Nansemond River High School baseball standout Jarret Henderson is making the most of his summer this year. He is... read more