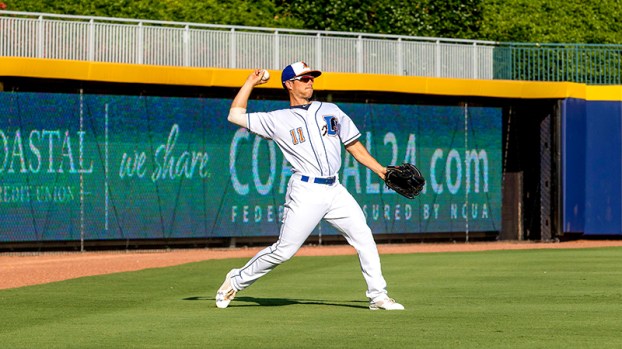 Brandon Lowe plays in the outfield for the Durham Bulls. Lowe, a Nansemond River High School graduate, impressed the crowd, including his family and friends, during a game against the Norfolk Tides at Harbor Park on Thursday evening. (Patrick Norwood/Durham Bulls)

Brandon Lowe blasted the first pitch that came his way for the Durham Bulls during their Thursday win against the Norfolk Tides in a Minor League Baseball matchup.

Lowe, a former Nansemond River High School baseball standout, currently plays for the Durham Bulls. The Bulls are a minor league team affiliated with the Tampa Bay Rays. Thursday evening, Lowe returned to the Hampton Roads area, where he had a chance to play in front of friends and family.

“It was a surreal experience,” Lowe said. “Getting to play in the park I grew up watching games in was amazing, and I was able to see many people from my hometown. Anytime we can get a win is a great day.”

The Bulls got a 12-1 win, and Lowe had an impressive game. He went 3-5 with two runs, two RBIs and a home run. His batting average was .316. The home run came off of the first pitch that came his way in the first inning.

“It was a good game, but I was just doing what I needed to help the team win,” he said.

Lowe grew up going to games at Harbor Park, and with the schedule he has and the teams he’s played, it’s not often he gets a chance to play close to home. The last time he was actually able to play in front of friends and family was in high school.

Before the game started, Lowe wasn’t sure how much support he was going to have at the game but was surprised and thankful to see who had come out to see him.

“It was unbelievable,” he said. “I walked out of the locker room, and I was shocked by all the people that were there to come support me. It was an incredible feeling knowing how many people believe in you to accomplish your dream.”

This season so far for the Bulls, Lowe has collected 24 hits, 15 runs, 17 RBIs and seven home runs. Before being called up to the Durham Bulls, he played for the Montgomery Biscuits for 54 games. For Montgomery, he had 58 hits, 37 runs, 41 RBIs and eight home runs. Lowe already has more home runs for the Bulls than he had for the Biscuits in more than 30 fewer games.

“I just want to keep helping this team win,” Lowe said. “I would love to be a part of what this team did last year.”

Last season, Durham won the AAA National Championship, and Lowe is hoping to help the team repeat this season. This is his third season in the minor leagues, and he has enjoyed every bit of it.

“It has been an amazing journey,” he said. “I have been meeting incredible people along the way, and I’m enjoying every minute of being able to play the sport I love.”

Morgan Lowers finished her junior season this year learning a lot about herself on and off the field. There were... read more