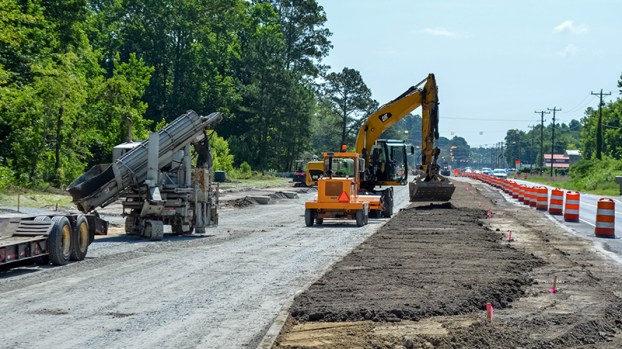 Work is ongoing to widen Nansemond Parkway in Suffolk and Portsmouth Boulevard in Chesapeake.

The widening of a roadway that will reduce congestion between Suffolk and Chesapeake is on pace to be completed this October, according to Chesapeake spokeswoman Elizabeth Vaughn.

Crews began working in April 2017 to expand Nansemond Parkway and its Chesapeake counterpart, Portsmouth Boulevard, into four lanes. Nansemond Parkway, which was previously widened from Helen Street west to the railroad tracks, will expand from Helen Street to the Chesapeake city line. Portsmouth Boulevard will be expanded from the city line to Jolliff Road.

The final top layer of pavement will be added this fall, Vaughn said.

“That helps create that continuity between the two sides,” she said.

The next phase in late July will redirect traffic to the exterior lanes going in both directions to allow for work on interior turn lanes, median, curbs and gutters. Vaughn said workers are progressing in sections so as to cause as little interference as possible for drivers.

“Just use extreme caution,” she asked drivers. “There’s going to be equipment between the lanes now. Just watch that speed limit and put your phones down.”

MBP Consulting is partnering with contractor Branscome Inc. and the cities of Chesapeake and Suffolk for this $27 million project that’s supported by the Virginia Department of Transportation and federal funding.

Sidewalks and a 10-foot-wide, multi-use trail will also be installed to address safety concerns, along with a raised median with protected turn lanes, enclosed drainage and storm water management features.

In observance of Independence Day, Suffolk city offices will be closed Wednesday, July 4. Normal operations will resume at 8:30... read more