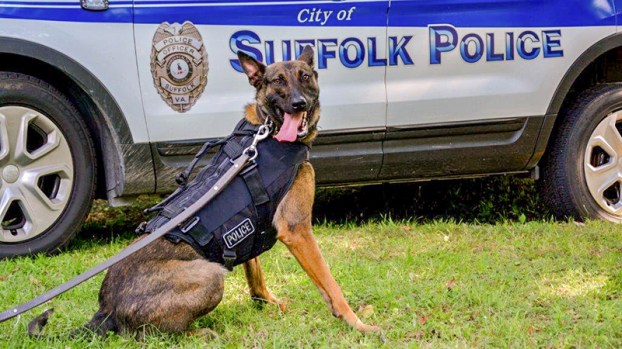 Salvo can finally go into battle without worrying about getting hurt, and his handler, Shane Sukowaski, knows that his partner is going to be safe when they go into work.

“We used to work without a properly fitting vest,” Sukowaski said.

Salvo wore an old vest belonging to Vigo, Sukowaski’s first dog, before receiving his own. Sukowaski described it as putting a full-size ballistic vest on his 4-year-old son.

The donation came as a surprise for both the dog and his handler. Sukowaski was approached by someone from Spike’s K9 Fund and, after asking a few questions, they revealed they wanted to get him a custom-fit vest.

“The K9 community is super close, and when they asked about Vigo I told them that I had a new dog,” Sukowaski said. “They got the ball rolling for me.”

After approval from the police department, Spike’s presented the vest to Salvo and Sukowaski.

“Getting the vest was a weight off of my shoulders,” Sukowaski said.

Ballistics vests for dogs have saved 40 to 50 working dogs’ lives, according to Sukowaski.

The journey to the K9 Unit was something that Sukowaski dreamed of, and now that he is handling his second dog, everything is second nature.

Working with dogs has been his dream since he decided to be a part of law enforcement, and out of his nine years with the Suffolk Police Department, he has worked with the K9 Unit for three.

“Working with them is all I’ve ever wanted,” Sukowaski said.

Now his work revolves around weekly training sessions and bonding with his dog to make sure they can do their job effectively.

Every police K9 has one main purpose — locate. The police department uses them as a locating tool for violent felons. Salvo not only is a patrol dog with Suffolk Police but also has received training to be a narcotics dog.

At a minimum, Sukowaski and Salvo have to train for 16 hours every month, but the Suffolk Police Department has the K9 Unit training weekly to perform their best when on the job.

Now that Salvo has a vest, the pair will begin implementing it into training before taking the vest into the field.

Sukowaski’s first dog, Vigo, is still his, and he is living out his retirement with him the Sukowaski family. They haven’t lost that bond, and now Sukowaski has another bond with Salvo.

“If I’m out somewhere, I know he’s got my back,” Sukowaski said. “In his mind, I’m the best thing in the world.”

With Salvo, though, things are just a bit different.

Salvo is mixed with Malinois, and the breed is very hard-working. The dogs tend to work nonstop, and that is apparent with Salvo even when they are at home.

There isn’t an “off switch” for police dogs like there can be for regular service animals, and that is something that Sukowaski has to stress to the public and even other officers.

“Salvo is always going to defend me. When he’s working, no one can be around him but me, and the officers know that,” Sukowaski said.

Salvo may not have an off switch, but he is an asset to the department and for Sukowaski.

“He wants to work, and he works hard,” Sukowaski said.