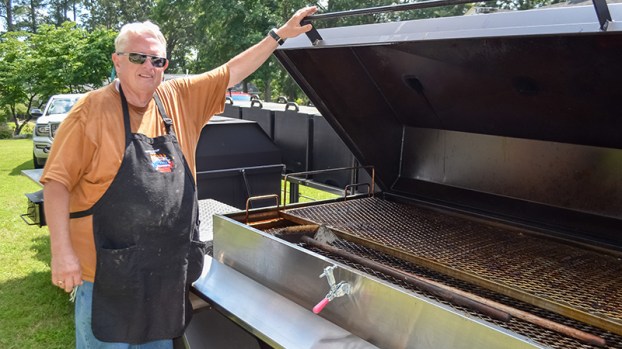 Cars, firetrucks, golf carts and even a mail truck pulled up to a River Road residence Saturday afternoon for delicious pork butt and ribs that raised money to help a local firefighting veteran.

Friends and family talked and laughed in the hot afternoon as more people stopped by to pick up their orders. Theresa Kitchen happened to be visiting from South Carolina to see her grandkids the same weekend that the Suffolk Ruritan Club was firing up the grill.

“These guys are the best cooks in Suffolk,” Kitchen said as her granddaughter Beka, 6, held a plastic bag filled with takeout boxes of hickory-smoked goodness. “It just so happened that I was going to be in town this weekend, so as soon as I saw it was going to happen on Facebook, I was the first one on their list.”

The Ruritans partnered with Suffolk Professional Fire Fighters Local 2801 to collect orders in the weeks leading up to the cookout and raise money for Fire Department Battalion Chief Andre Durham, who was severely injured in a motorcycle accident earlier this year.

Most of the people gathered at the parking lot had been friends and colleagues for decades, including Kitchen, who had retired from the Suffolk Commonwealth’s Attorney’s Office three years ago after working with these men and women for more than 20 years.

“Anything I can do to help out,” she said.

“We put a lot of love in our meat, low and slow. You just can’t rush it,” Patterson said.

Their patience paid off when they sold out at 108 pork butts and 110 pork ribs drenched in a crowd-pleasing secret sauce, according to Sheriff and Ruritan E.C. Harris. The volunteers sweated through their shirts and chugged water as they packed takeout boxes.

“We could have kept right on going,” Harris said.

Durham, who will reach 26 years with the city of Suffolk this August, was there with his wife Roslyn to show their gratitude.

“I just can’t thank everyone enough for the continued love and support from my fellow firefighters and the community as well. It’s amazing how folks come together to help someone when they’re down,” Durham said.

His motorcycle accident in January removed him from active duty and he’s been steadily regaining his strength with multiple eight-hour days of physical therapy weekly.

“He’s been a great battalion chief and we’re so sorry that he had the accident,” said Vice Mayor Leroy Bennett. “We’re just so happy that he’s improved. Hopefully, within the near future, he will be able to return back to work.”

His colleagues found him in the scorching afternoon sun and immediately shook his hand.

“The firefighters have been a true family to my husband, and I appreciate everything they’ve done,” Roslyn Durham said.

Interim Fire Chief Edward “Ed” Taylor stopped by to say hi and check on Durham. Taylor had worked with Durham for 20 years before he retired June 2013. The interim chief had watched Durham rise through the ranks and become family to each other and the rest of the crew.

“We work 24 hours on,” Taylor said about him and the other firefighters, “and when we’re there we spend as much time with the firefighters as we do with our real families. When we’re there we’re always eating together. We basically live, sleep and do everything else together and when we’re out on a call we rely on each other for safety and protection. They cover my back, in other words.”

For Durham, it’s simply an honor.

“It’s been a true blessing to be part of this family,” he said.

Salvo can finally go into battle without worrying about getting hurt, and his handler, Shane Sukowaski, knows that his partner... read more